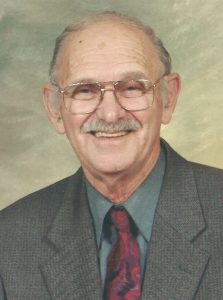 Mr. Looper was born July 9, 1930, in Alexander County, the son of the late Edward Looper and Delsie James Looper.

He was a construction manager, having worked for Rhodes-Day-Elledge, retiring from Helig-Meyers, and then had worked for 15 years for David E. Looper & Company. He was a member of Mt. Hebron Baptist Church.

He loved his family, but most of all his wife of 68 years. He was a former Captain of Alexander County Rescue Squad. He truly enjoyed meeting people and was a people person.

Including his parents, he was preceded in death by a brother, Johnny Looper.

The funeral service will be held at 11 a.m., Thursday, August 2, 2018 at Mt. Hebron Baptist Church. Rev. Steve Parks will officiate. Burial will follow in the church cemetery. The family will receive friends from 6-8 p.m., Wednesday, August 1, 2018 at Adams Funeral Home.

Adams Funeral Home and Cremation Services is honored to be serving the Looper Family.