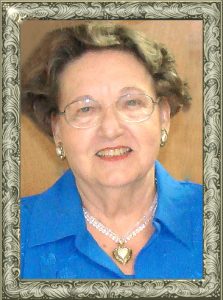 Ann Rogers Greer, of Lexington, previously of Taylorsville, passed away on August 2, 2018 at Alston Brook Home of Lexington after over four years of declining health subsequent to a stroke in 2014.

Ann was born to Bea and Lindsay Rogers on July 22, 1930, in Alexander County. Ann graduated from Alexander County High School in 1947 and attended Appalachian State Teachers’ College in Boone. While there, she met and married Frank B. Greer, who was a WWII veteran returning to college. Later, Ann continued her education at Catawba College in Salisbury.

Ann was a homemaker while her three children were very young. She worked as a teacher and a substitute teacher at various schools through the years, as well as an administrative secretary at Department of Human Resources and Division of Aging in Clinton, and as a bookkeeper at Sencland Community Action, Inc. in Whiteville.

Ann and Frank were members of First Baptist Church in Lexington and of First United Methodist in Taylorsville, prior to moving to Lexington. In younger years, Ann taught Sunday school and worked with Boy and Girl Scout groups with her children as they grew up. They were active members in churches where they lived through the years.

Ann was a wonderful wife, mother, grandmother, and great-grandmother. She was dedicated to making sure the needs and happiness of her husband and family were taken care of. She took on arranging for the care of various relatives through the years. She wanted all of her children and grandchildren to be strong and enthusiastic readers and thinkers, and to use those skills in their work and lives.

In younger years, she and Frank enjoyed playing bridge with friends and family. They were very interested in current events and politics. Lifelong learning was important to them both. Reading and word puzzles were favorite pastimes for Ann throughout her life.

Ann was preceded in death by her husband of almost 70 years in February of 2018, by her mother and father and by two of her siblings, Florrie Kerley (Kenneth) and Lee Rogers (Mary), both of Taylorsville.

The family wishes to express our thanks for the kind and loving care Ann has received by many special care givers at Alston Brook Home over the past several years. Special thanks goes to Donna Cooke, who has been like part of the family for about three years, giving loving care to Frank and Ann during their final years.

Adams Funeral Home and Cremation Services of Taylorsville is honored to be serving the family in Ann’s final arrangements.