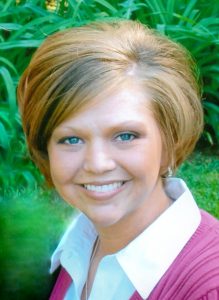 Sarah Elizabeth Lackey Leach, 39, of Taylorsville, passed away on Thursday, August 9, 2018 at Wake Forest Baptist Medical Center after a long, courageous battle with Leukemia, since she was 18 years old. In the end, she won the victory to forever be home with her Lord and Savior, Jesus Christ.

She was a life-long member at East Taylorsville Baptist Church where she served in many areas whether with the Sunday School, children’s camp as a counselor, V.B.S., and serving with Awana. Sarah had a heart of gold, especially serving with the hospitality committee and helping others. She never met a stranger.

Sarah was a precious jewel that will be missed but she will forever be cherished in our hearts.

Along with her parents, those left to cherish her memory include her husband, Steve Leach, Jr. of the home; step-son, Campbell Leach of Charlotte; brother, Andrew Lackey of Charlotte; aunts, Judy Keighron of Statesville, Marlayne Staley of Wilkesboro, Barbara Cothren of Taylorsville, and Penny Burgess of Taylorsville; a number of cousins; and best friend forever, Heather Houston.

Honorary Pallbearers will be the active deacons of East Taylorsville Baptist Church and Scott Houston.