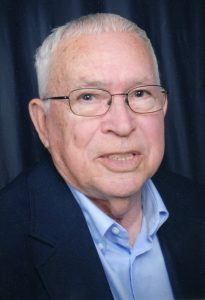 He was born October 15, 1932, in Pitt County. He was the son of the late Charlie and Pearl Elmore Dail. Charlie retired from Waldorf Paper Box Co. after working there for 29 years. He then worked at Mitchell Gold for 18 years until his retirement from there.

Charlie was an active member of Mt. Hebron Baptist Church until his recent illness. He was a master gardener, being known for always having a good garden. Charlie also loved to fish, work on his tractor, and travel to numerous places. He never met a stranger, he was a great conversationalist.

Along with his parents, he was preceded in death by his brothers, Herbert, Willie, Robert, Grady, Preston, Jasper and Roy Dail, and Claude, Harry “Pete” and Paul Westbrook; and sisters, Ethel D. Smith and Virginia D. Freeman.

Visitation will be held at Alexander Funeral Service on Tuesday, August 14 from 6:00 p.m. – 8:00 p.m. The family will also receive friends on Wednesday, August 15 from 2:00 p.m. – 3:00 p.m. at Mt. Hebron Baptist Church. The funeral service will follow at 3:00 p.m. with Rev. Steve Parks and Rev. Gary Jennings officiating. Burial will follow at Mt. Hebron Baptist Church Cemetery.