On Tuesday night, August 14th, the Alexander County Board of Education approved the hire of former standout player Kylie Cockrell Hamby as the Head Coach of the Alexander Central High School Softball team. Hamby will fill the position that came open earlier this summer after Head Coach Darrell Adkins announced his retirement after three seasons at the helm of the program. 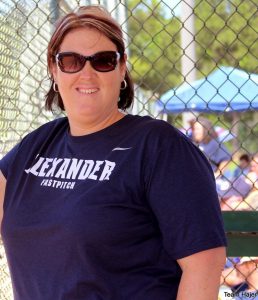 Former ACHS Star Kylie Hamby has been selected to coach her Alma Mater.

Kylie Cockrell Hamby commented “First and foremost, I am thankful that the Lord has opened this door for me in my coaching career. I want to thank the administration of Alexander Central High School for giving me the opportunity to lead a program with such strong tradition.”

Cockrell Hamby continued by saying “I am proud to return back to Alexander Central as a Coach and give back to the program that has given me so many opportunities. I am looking forward to working with the coaches and players here at ACHS to continue the tradition of softball excellence that we are known for.”

By accepting the position of Head Coach, Cockrell Hamby returns to lead the program that she once played for as well as once served as an assistant coach for. During her high school playing career, from 1995 through 1998, she was able to generate impressive accomplishments as a dominant pitcher. After her high school career, Cockrell Hamby played at Pfeiffer University from 1999 to 2002. She served as an assistant coach at ACHS under former Head Coach Monte Sherrill from 2008 until 2015. For the past 11 years, Cockrell Hamby has coached in the Alexander Gold travel organization which she established.

Alexander Central High School Principal Gordon Palmer commented “Coach Darrell Adkins did a great job with the program and he left it in great shape. I am confident Kylie will continue the tradition of running a premier softball program that she has been a part of and has a strong passion for.”

Cockrell Hamby is married to Todd Hamby and they have two daughters, Ava age seven, and Kyla age nine. Cockrell Hamby is employed with the Alexander County School System as an elementary Physical Education teacher.

Alexander Central High School Athletic Director Nathan Robinson commented on the hire by saying “I am excited by the hire of Kylie Cockrell Hamby and to see her continue the tradition of our softball program. I am looking forward to working with her in our athletic department and watching her inspire and lead the young ladies on her team not only on the field but off the field as well.”

Kylie Cockrell Hamby accomplishments as a player at ACHS