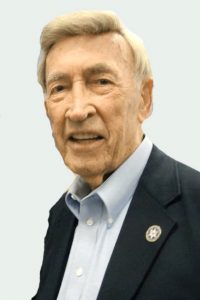 Mr. Hines was born December 24, 1932, in Alexander County, the son of the late Clifford Sims Hines and Helen Allen Hines.

He was a Deputy US Marshal. He began his career in 1956, and was sworn into service in Wilkes County, but worked out of Greensboro. He retired after 30 years of service in Middle District of North Carolina.

A retired US Marshal, he helped to enroll James Meredith and integrate Ole Miss in 1962, with letters of commendation from President John F. Kennedy and Attorney General Robert F. Kennedy and a medal awarded from Attorney General John Ashcroft in 2002. He was also a veteran of the US Army Military Police during the time of the Korean Conflict.

Including his parents, he was preceded in death by a sister, Margaret Dean Hines Howie; the mother of his children, Shirley Mae Warren Mitchell; and a step-son, John Clinton Donavon Prichard, III.

Adams Funeral Home and Cremation Services is honored to be serving the Hines Family.