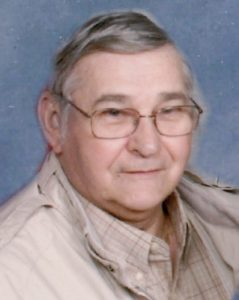 Lawrence Junior Hubbard, 73, of Hiddenite, left this world for his eternal home on Friday, August 24, 2018 at his residence.

He was born on March 13, 1945, in Wilkes County, the son of the late Carter Baxter Hubbard and Hattie Hubbard Watts. Lawrence honorably served our country in the North Carolina National Guard. He was a member at Fairview Baptist Church.

Before retirement, he worked for Broyhill and Hickory Hill Furniture. He was a wholesale produce supplier, whose name was known far and wide as “the produce man.” He would always provide fruit baskets at Christmas time to people in the community and at church.

Lawrence enjoyed watching NASCAR and he also raced, both on the dirt track and at Hickory Speedway. There wasn’t anything that Lawrence couldn’t fix. He loved to get his hands dirty, especially mechanic work.

He was a faithful husband, father, grandfather, brother, and friend to many who will truly be missed but will forever be in our hearts.

Along with his parents, he was preceded in death by his brothers, Escoe, Tommy, Grady, John and Dwight Hubbard; sisters, Nannie Kerley and Hetty H. Wilcox; two infant siblings; and nephew, Paul Wilcox.

Those left to cherish his memory include his wife of 51 years, Kay Hubbard of the home; son, Rodney Hubbard and wife Stephanie of Stony Point; daughter, Rochelle Blakenship of Hiddenite; grandchildren, Dara Little and Chase Blakenship of Hiddenite; sister, Hilda Fulmer of Greenville, South Carolina; a host of nieces and nephews; along with special friends, Bill Davidson and Claude Barnes.

The family will receive friends on Monday, August 27, 2018, from 2:00 p.m. – 3:00 p.m., at Fairview Baptist Church. The funeral service will follow at 3:00 p.m. with Rev. Durant Barr and Rev. Gurney Robbins officiating. Burial will follow in the church cemetery.

In lieu of flowers, memorials may be sent to The Gideons International at PO Box 517, Taylorsville, NC 28681.