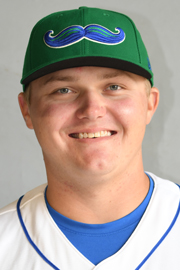 Tad Ratliff chalked up four saves in the post season to anchor the Legends’ bullpen during its title run.

A reliever for the Lexington Legends Class A affiliate of the Kansas City Royals, Ratliff was a crucial member of his team’s bullpen during last week’s South Atlantic League Championship Series against the Lakewood BlueClaws.

The Legends closed out the best-of-five finals series on Friday, September 14, with a 2-1 win in New Jersey. In the final game of the season, Ratliff picked up his fourth post-season save in the Legends’ win. The victory on Friday, allowed Lexington to win the championship series over Lakewood 3-1.

Prior to winning the finals series, the Legends won a best of three series over Rome, Georgia in the semi-final round. Ratliff, who closed the regular season with 10 total saves and a 1.68 earned runs average, earned one save in the semi-final series and tallied three saves in the finals. He factored in four of the five Legends’ post season victories.

“Throwing in big games is what I love. I love it when the pressure is on and it’s my best versus his best,” Ratliff said. “Being able to have a part in every win this post season means a lot to me. It means I gained the coaches’ trust and they felt that I was the guy for the job. Winning the whole thing was an unreal moment. It’s a moment I will remember for a very long time.”

Ratliff is the son of Annetta and Terry Ratliff of the Ellendale Community.

The Legends close the book on the 2018 season with a 76-60 regular season record and as South Atlantic League Champions.