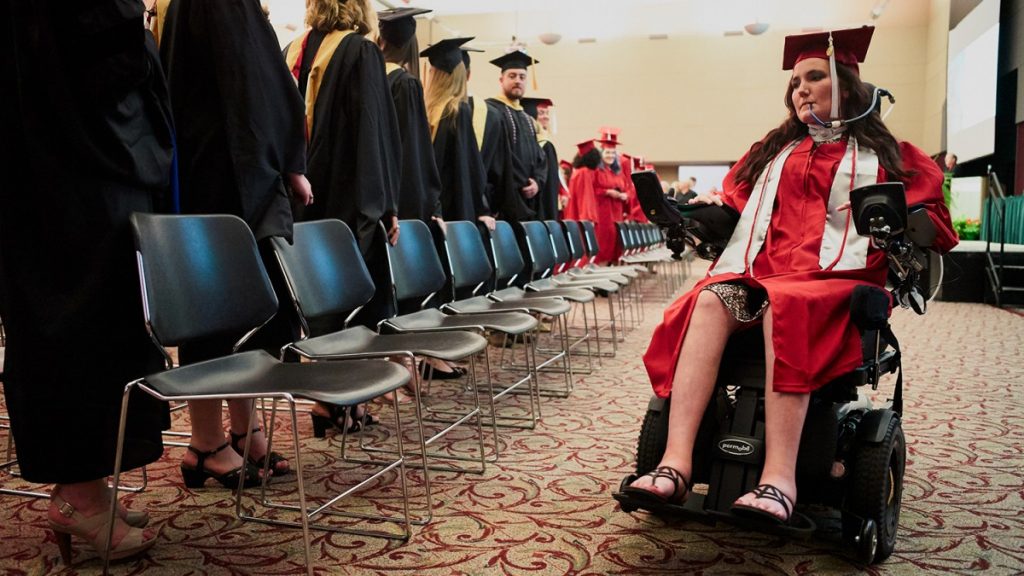 Kelly Blanton’s long-term goal is to combine the two therapies that helped her so much during recovery: counseling and animal-assisted therapy. 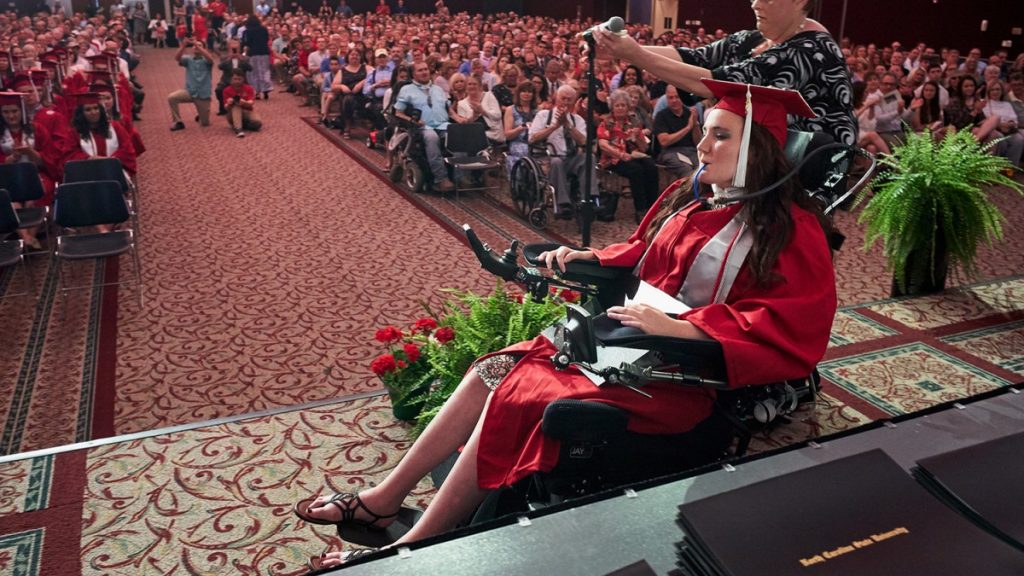 Kelly Blanton takes center stage during graduation ceremonies at McKimmon Center in Raleigh in May.

Determination, Patience,  And Grace
The Animal Science curriculum is rigorous and emphasizes hands-on experience in real-world settings. By adding a second major, and one in the humanities, Kelly was choosing to double her coursework. But she knew that an interdisciplinary approach would strengthen her resume.
She dove right in.
“Kelly is indomitable. Irrespective of physical challenges, she is a force to reckon with,” says Shweta Trivedi, Kelly’s professor for Anatomy and Physiology sophomore year. “She is a role model for students who are disabled and want to do a science-intensive curriculum.”
For Anatomy and Physiology, Trivedi and Kelly worked out a system where a teacher’s aide acted as Kelly’s hands during dissections.
“I never held her to lower standards,” Trivedi says. “She wanted to be treated as any other student, and she came through.”
At the end of that semester, Kelly had the highest grades in the class.
“Kelly Can Help Lead The Way”
In her senior-year internship at RHA, an organization that provides support services for individuals with intellectual, physical and developmental disabilities or substance abuse challenges, Kelly was a liaison for client services. She worked with RHA after the accident, so she understands the system.
“She’s been where these families are, so I think it’s a hope and encouragement for them to see how she’s navigated the system,” says her supervisor, Director of Case Management Services John Gibbons. “She can reach out and help advocate for others.”
After her internship ended, there was one final hurdle to cross – but she made it. Kelly was accepted to NC State’s graduate program in social work. She returns to campus in the fall.
Her long-term goal is to combine the two therapies that helped her so much during recovery: counseling and animal-assisted therapy. Involvement from students like Kelly is very important for the future of the field, Hediger says.
“Although availability is growing, it is sometimes still seen as ‘exotic’ and not very easy to get access,” Hediger says. “What we need is a growing professionalization, and it is important that the students get proper education.”
Those who know Kelly see her as perfect for the task.
“With the future headed towards animal therapy as part of pain management and emotional and mental wellbeing, disabled individuals can go through daily life in a richer way,” Trivedi says. “Kelly can help lead the way.”
Her long term physical prognosis is still uncertain; she still has very little movement capability below her shoulders, and remains reliant on a diaphragmatic pacing system to breathe. Another device allows her to direct her wheelchair with small movements of her tongue.
“I have hope that one day technology will advance, or that I’ll be healed, but I’m going to do the best I can with what I have right now,” Kelly says. “Talking to my counselor, I realized that my mind and my voice are my independence. And I can still use those to make my own future.”
(Editor’s Note: The following piece recently appeared on the NC State University’s College of Agriculture and Life Sciences News website and in the CALS Magazine. It is being published with the school’s permission.)
Posted in Breaking News, News