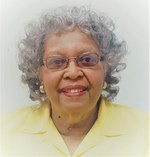 Mrs. Lackey was born on June 2, 1939, in Alexander County, the daughter of the late Harvey Lee Mayes, Sr. and Lucille Elizabeth Millsaps Mayes. She was married to K. Russell Lackey for 58 years.

In 1987, she was presented the Long Leaf Pine Certificate by Governor James Martin for her volunteer service with the Statesville Chamber of Commerce’s Education Committee. Her Master’s Degree project was published in the National Education Journal in 1990.

Mrs. Lackey touched the lives of many through her many labors of love. At Macedonia Baptist Church, her former church, she was a member of the choir, usher board, and Sunday School and Christian Education Director. At Shiloh, she was a Sunday School Teacher, a member of the Deaconess Board, Usher Board, Christian Ed. Dept., Parent Body, Stewardess Bd., Life Member of the Missionary Society, Trustee Board (Chairman 1995-1999), Chancel Choir, Building Committee, and Lay Council.

She served the Statesville District in some of the same organizations, having served as District Christian Education Director for 24 years. Bettye also worked with these organizations on the conference level and was a member of the Camp Dorothy Walls Trustee Board, Vice Chair of the Christian Education Board, DWCRC Mountaintop Gala and a member of the Albert Stout Scholarship Fund. She was always willing to assist in many facets of the local, district, and conference church as needed.

For many years, Bettye’s outreach included the community. She was Vice Chair of the Yokefellow Ministries and on its Board of Directors, assisted at Fifth Street Ministries during Thanksgiving and Christmas, and was on the Chamber of Commerce Education Committee.