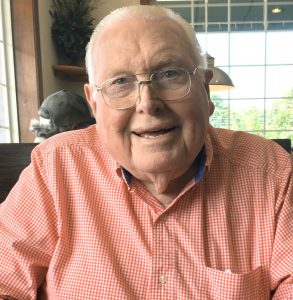 Billy B. Cooper of Taylorsville, formerly from Charlotte, went home to be with the Lord on October 6, 2018 at the age of 93 years.

In addition to his wife and parents, he was preceded in death by his infant daughter, Alice Yvonne; sister, Norma; and brothers, JT and Herschel.

Bill served his country in the Navy during WWII in the South Pacific theater as Gunners First Mate aboard the USS Wyman DE and as a Sergeant in the US Air Force’s 7th Bombardment Wing supporting the B36 Peacemaker during the Korean War.

He began his civilian career in Dallas, Texas, with Western Auto Supply. After moving to Charlotte, he graduated from Kings College with a senior accounting degree and then taught business courses at Kings College for five years. Bill worked as an accountant and credit manager for Contractors Service and Rentals until he retired in 1987.

He was a charter member of Cokesbury United Methodist Church, where he taught the International Sunday School Class for 30 years. He was a certified lay speaker for 20 years, served as a lay leader for six years, and was awarded Lay Person of the Year in 1996. As such, he delivered the sermon once or twice a year at Cokesbury and served on a rotation basis holding services at Brian Retirement Center for 10 years. Bill also volunteered for 10 years at Friendship Trays by delivering meals to the elderly.

The family will receive friends at Salem Lutheran Church in Taylorsville, from 2:30 to 4:00 p.m., on Tuesday, October 9, 2018. Funeral service to follow at 4 p.m. with Rev. Gaven Mize officiating. Burial will follow in the Jolly Cemetery.