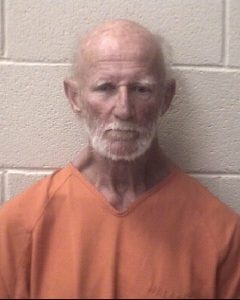 On Saturday, October 6, 2018, at approximately 12:00 a.m., Alexander County Sheriff’s Office deputies and Hickory Police Officers responded to an address in the Bethlehem Community in reference to an involuntary commitment. The commitment papers were the result of an incident that occurred on the previous day in Hickory, where the offender made threats to shoot at Frye Regional Medical Center, according to Alexander County Sheriff Chris Bowman.

After he told the officers to come up the residence, Aldridge fired a weapon at the officers. Rounds hit the officer’s patrol car. The officers backed out of the location and took cover, the Sheriff stated.

Aldridge continued to make threats that he would shoot officers if they did not leave his property. Aldridge called the Alexander County Sheriff’s Office Communications and told them to have the officers leave the property, or he would shoot. He told them that if they came to the door he would blow their heads off. Officers heard several more shots. Officers could not return fire because they could not see the offender or where he was located, Bowman said.

Captain Pennell and Lt. Jason Moore were contacted to assist. Alexander County’s Special Response Team (SRT) was notified to respond to the residence. Neighbors in the immediate area were evacuated. Catawba County Sheriff’s Office was notified to see if they would assist using their armored vehicle, said Bowman.

Catawba Sheriff Coy Reid and a lieutenant responded to the location with the armored vehicle, which was used to approach the offender’s residence. Officers made numerous attempts to get Aldridge to come out of the residence and surrender. Aldridge continued to threaten officers and stated that he would kill any that came to his door.

Hickory Police Officers blocked the driveway coming into the residence.

At approximately 5:00 a.m., Aldridge stopped communicating with officers. At approximately 7:30 a.m., Sheriff Bowman made the decision for officers to make entry. Officers made entry into the basement of the residence. As officers entered the basement, Mr. Aldridge opened the garage doors and surrendered to officers that were outside the doors. Aldridge was taken into custody without further incident. Neither the officers nor Aldridge were injured in the altercation, Sheriff Bowman related.

Aldridge was arrested for the following offenses: 7 counts of Assault on a Government Official with a Deadly Weapon, 7 counts of Communicating Threats, and 7 counts of Attempted Murder on Law Enforcement Officers. Aldridge was held on $6,000,000 secured bond. His first court appearance was Monday, October 8, 2018, in District Court in Taylorsville.

A search warrant was issued and served on Aldridge’s residence the same morning as the incident. Detectives seized a shotgun, a rifle, a revolver, and numerous rounds of ammunition from the house. Officers also located marijuana at the residence.

The case is continuing and more charges are likely for the controlled substance.