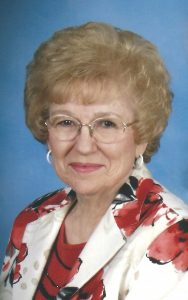 Mrs. Herman was born May 5, 1936, in Cabarrus County, and was the daughter of the late Floyd Keller and Loula Matthews Keller.

Including her parents, she was preceded in death by the love of her life and husband of 63 years, Ned C. Herman, and a sister, Kim Bost.

The family wishes to extend a special thanks to caregivers, Martha Terry, Cathy Sanchez, Carmen Brookshire, and Brenda Perry.