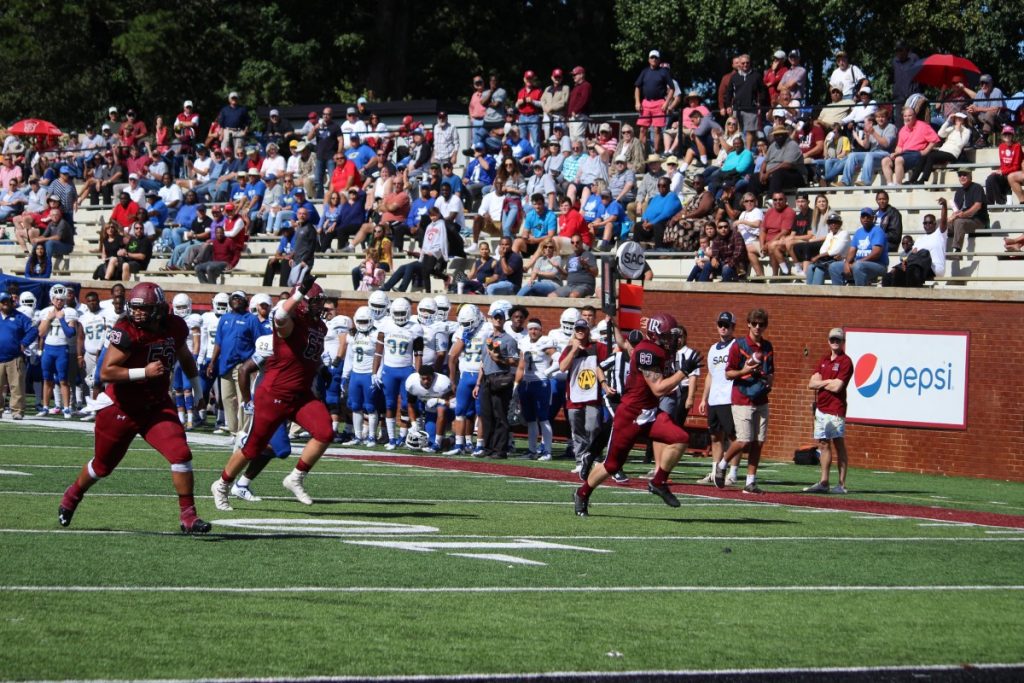 LRU’s Drake Starks heads to the end zone after hauling in a pass from Gunnar Anderson on Saturday in Hickory. The TD pass was the first of Anderson’s collegiate career at LRU.

HICKORY, N.C. – The Lenoir-Rhyne Football Team exploded for its highest scoring output since 1975 in a 63-17 destruction of Limestone on Homecoming Weekend. The Bears scored the most points in nearly 43 years when they put up 69 against Davidson under Head Coach Jack Huss.

STATS OF THE GAME:
•   The Bears entered the game ranked 15th in the nation in rushing offense and proceeded to run for 496 yards in this one. Bradley Jones ran for a career-high 109 yards and found the end zone twice. Fellow RB Caine Crews also recorded a career-high 66 yards on just 10 carries and Ameen Stevens finished with two touchdowns on the ground and one in the air while piling up 48 all-purpose yards.
•   For the second straight week, the Lenoir-Rhyne special teams found paydirt thanks to a 69-yard punt return from Jaquay Mitchell. Mitchell’s TD at the 8:40 mark of the third quarter gave LR a 49-3 advantage.
•   Freshman QB Gunnar Anderson (Alexander Central) made his second straight start and went 9-for-13 with a pair of touchdowns and 113 yards passing before giving way to Matt Williams and Trevor Shue to close out the win.
•   The Bears 57 rushing attempts are a season-high and the most since rushing 59 times against Catawba on November 14, 2015. Additionally, the 496 rushing yards are the most since running for 591 against Tusculum in September of 2015.
•   Defensively, Sherrod Williams finished with 13 total tackles in just three quarters of action. The linebacker added a tackle for loss, forced a fumble and recorded a sack. Jaquan Artis was unblockable as the DE had nine tackles and three QB hurries. Eric Jackson added his team-leading third interception of the year.

BEYOND THE BOXSCORE:
•    Mitchell’s special teams’ touchdown is his seventh TD on the season. The all-around threat has four rushing touchdowns, two receiving scores and now a special teams TD.
•    13 different players had a rushing attempt for the Bears, including open field threat Kyle Dugger. Dugger broke a program record with two punt returns for touchdowns in last week’s win at Newberry and saw his first offensive touch of the season.
•    LR has rushed for multiple touchdowns in every game this season. With his two touchdown effort today, Stevens leads the South Atlantic Conference with six rushing scores.
•    Cody Rau had a solid effort for Limestone, hauling in eight balls for 145 yards and a touchdown.
•    The LR rush defense allowed Limestone just 93 yards on 33 carries, an average of 2.8 yards per carry.

UP NEXT:
LR will travel to Fort Valley State next Saturday, October 20, looking for win number seven in a row.