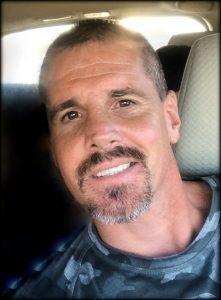 Robin Ryan Ward, 42, of Hiddenite, passed away unexpectedly on Friday, October 19, 2018 at his residence.

He was born on December 19, 1975, in Florence, South Carolina, the son of David and Margaret “Sally” Walker Ward. Robin was a truck driver for Fox F4 Trucking and enjoyed spending time with his family. He was of the Baptist faith and attended East Taylorsville Baptist Church, but was a member at Linney’s Grove Baptist Church. Robin also enjoyed hunting, fishing, and motor cross.

He was preceded in death by his brothers, David Allen Ward and Jack Ward, along with his sister, Julie Ward Webb.

Along with his parents, those left to cherish his memory include his wife, Kessie Pennell Ward of the home; son, Colson Ward of the home; daughter, Bria Ward of Statesville; stepson, Jacob Gourley of the home; two brothers, Sam Ward and Kelly Ward (Jennifer), both of Hiddenite; three sisters, Janet Christmas (Terry) and Kim Haywood (Billy), both of Florence, South Carolina, and Tammy Beckham (Bobby) of Taylorsville; a number of nephews, nieces, and cousins; and special friends, Cody Smith, Billy Fox, and Wayne and Joyce Wooten.

The family will receive friends on Friday, October 26, 2018, from 4:00 p.m. – 6:00 p.m. at Alexander Funeral Service. A memorial service to celebrate Robin’s life will follow at 6:00 p.m. in the funeral home chapel with Rev. Gary Jennings officiating. Inurnment will be with the family.