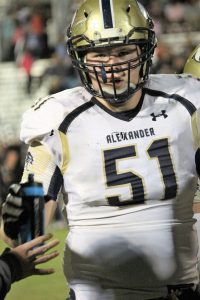 ACHS Senior Isaac Chapman is the sixth Cougar to earn a spot on the NC Shrine Bowl Team and the first in 12 years.

Defensive standout becomes sixth Cougar to be selected for game

On Sunday, the Shrine Bowl of the Carolina Game officials announced the players for the North and South Carolina teams that will face off in December in one of the south’s biggest all-star games.

Alexander Central’s Isaac Chapman has been selected to the North Carolina Team and is the sixth player in Cougar history to earn a spot in the game.

The 2018 Game will be played Saturday, December 15, at Gibbs Stadium on the campus of Wofford College in Spartanburg, SC. The game will kick off at 1:15 pm

Chapman has also been selected to play in the Blue Gray All-Star Game in Tampa, Florida in January 2019.

Isaac is the son of Sonya and Gary Chapman of the Sugar Loaf Community.

About the Shrine Bowl

The Shrine Bowl of the Carolinas was first played on December 4, 1937 in Charlotte, N.C., making it the oldest high school football all-star game in the nation.  The annual game featuring many of the top high school players from North and South Carolina is played to benefit the Greenville (South Carolina) Unit Shriners Hospital for Children © and the 21 other Shriners Hospitals for Children © across the nation.

Having always been played on the third weekend in December, the game culminates the year’s fund-raising efforts of the six shrine temples involved in operating the game.

The Shrine Bowl began in 1937 based on the model of the East-West Shrine Game that was played in San Francisco, but the game took on a new slant in the Carolinas.  Instead of being a college all-star game, it would become the nation’s first high school football all-star game.

The inaugural game in 1937, under the leadership of former Charlotte Fire Chief Hendrix Palmer attracted 5,500 spectators, many of whom paid one dollar to attend and raised $2,500 for the hospital.  Since 2013, game receipts and temple contributions have raised over 1.7 million dollars.

Since the first game, over $75 million dollars have been raised for Shriners Hospitals.

The Shrine Bowl of the Carolinas and the six sponsoring Shrine Centers have always led the Shriners International in contributions to the Shriners Hospitals for Children ©, and the game has been replicated or adapted by every Shrine Center in the country that promotes an athletic event.