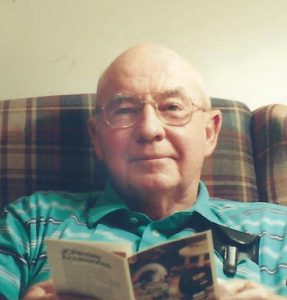 It is of great sadness to report that Dr. John Lane Roberson, 86, of Taylorsville, passed away on Friday, November 2, 2018 at Gordon Hospice House in Statesville.

He was born October 18, 1932, in Buncombe County, the oldest son of the late John Roberson and Julia May Worley Roberson.

He spent some childhood years in Marshall, in Madison County. Some of his elementary years were spent going to school on the “Island” on the French Broad River.

He graduated from Taylorsville High School in 1950, received his Bachelor’s degree in Electrical Technology from the University of Houston and received his Masters and PhD in Occupational and Industrial Education from NC State University.

He worked for Randolph Community College for 32 years. He was among the first instructors and taught for one year. He also worked as Evening Director. Most of his years, he worked as the Dean of Student Services until his retirement in 1995.

Dr. Roberson took over his father’s apple orchard located on Silas Deal Road upon his father’s death. He started a family owned business of growing apples that were sold to grocery stores, farmers markets, and local residents.

Dr. Roberson had a gift for meeting people and enjoyed telling stories of his childhood and life experiences to his family and friends. He loved wood working and had a passion for reading where he could consume a handful of novels over a weekend.

A Celebration of Life Service will be held at 3 p.m., Wednesday, November 7, 2018 at New Salem Presbyterian Church, 4415 Old Mountain Road, Stony Point, NC 28678. Rev. Curtis White, Rev. Steven Dagenhart, and Speaker George Holleman will officiate. Burial will follow in the church cemetery with full military honors accorded by Navy Honor Guard and DAV Chapter 84 of Taylorsville and Chapter 6 of Hudson. The family will receive friends one hour prior to the service.

Memorials may be made to: Gordon Hospice House, or Alexander County Public Library, or New Salem Presbyterian Church Memorial Fund.

Adams Funeral Home and Cremation Services is honored to be serving the Roberson Family.