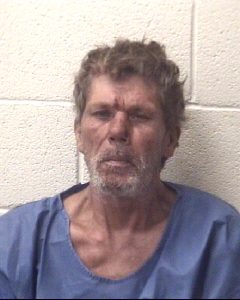 A stabbing has left a Taylorsville man hospitalized after an attack this week.

On November 8, 2018, at 7:42 p.m., officers with the Alexander County Sheriff’s Office and Taylorsville Police responded to a reported stabbing located at 935 Old Wilkesboro Road, Taylorsville, according to Sheriff Chris Bowman.

Upon arrival Officers found a 38 year-old male suffering from several stab wounds to his chest. The victim told officers that a man by the name of Joseph Nelson had stabbed him with a knife.  Officers found that suspect in a wooded area near the victim’s home and were able to take him into custody.

The suspect gave officers the name of Joseph Nelson which was later determined to be false.  The suspect’s real name is Jackie White, age 53, possibly from Florida.  White was taken into custody and charged with Assault with a Deadly Weapon Inflicting Serious Injury with Intent to Kill.

The victim was transported to Wilkes Regional Hospital and then flown by helicopter to Baptist Hospital in Winston-Salem. He is listed in stable condition at this time. The suspects bond was set at $150,000.  It is not clear at this time what led to the incident.  A first appearance is set for November 12, 2018.  The investigation is continuing.