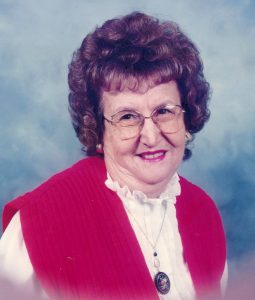 She was born November 27, 1926, in Alexander County, to the late John Glover Mayberry and Fannie Mitchell Mayberry. She was a textile worker and member of South River Methodist Church. She loved to cook, make pies and give to people; she loved her red roses, and also loved to sing.

In addition to her parents, she was preceded in death by her first husband, Lester Alexander Lackey; a second husband, Clarence Monroe Kerr; and four sisters, Ethel Kathryn Mayberry, Loretta Warren, Hazel Lambert, and Edith Perry.

Memorials may be given to Midway United Methodist Church Cemetery Fund.

Condolences may be e-mailed to the Kerr Family by visiting our website at www.chapmanfuneralhome.com.