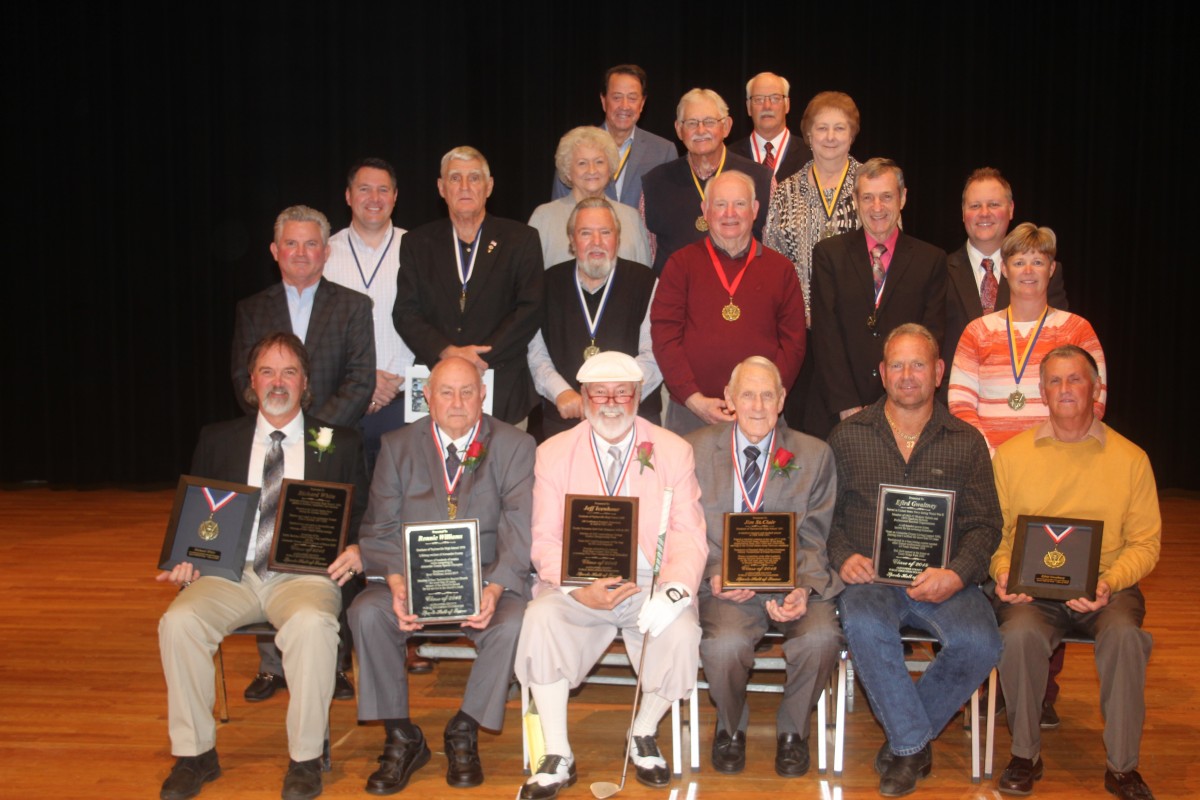 By D.N. PENNELL, Jr.
The Alexander County Public Education Foundation held its seventh  Sports Hall of Fame induction ceremony on Monday night, November 19, at the Alexander Central High School Auditorium  in Taylorsville.
A crowd of more than 200 family, friends, and sports lovers converged on ACHS to honor five inductees, who  will now be considered Hall of Famers for life.
Johnny Bruce, who serves as the Chairman of the Hall of Fame Selection Committee, explained the selection process to the crowd and introduced members of the selection committee. 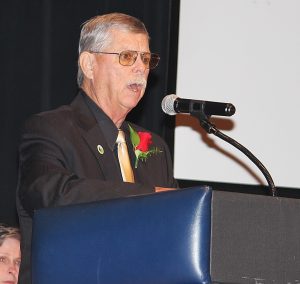 Each Hall of Famer was presented with a medallion and a Hall of Fame plaque. In addition, the Hall of Fame inductees will be honored with a plaque featuring their individual busts. These plaques will be permanently displayed at the entrance to the Alexander Central High School gymnasium.
Master of Ceremonies Richard C. Gilbert of WACB Radio introduced each inductee. Bruce and selection committee member Anna Ferguson conducted the official induction, presenting each person with a Hall of Fame Medal and a plaque.
• • • • •
The first new Hall of Famer to take a spot in the prestigious group was the late Efird Gwaltney. Two of Gwaltney’s sons, David and Gary, accepted his medallion and plaque on behalf of the family.
Retired Alexander County Clerk of Court Seth Chapman, who grew up as a younger neighbor to Gwaltney, spoke on behalf of the Gwaltney Family at Monday’s event.
“I love Efird Gwaltney. Efird Gwaltney was a man of principal,” Chapman said.
Chapman went on to talk about how Gwaltney was a role model and father figure later in life.
“I lost my dad at 16 years old. I will always remember Efird being one of the first to come by our house at that time of loss.”
A feared hitter, Gwaltney played for the 1951 Hickory Rebels Baseball Club and compiled a 13-6 record. He once blasted three homers while playing a game for the Rebels team. In addition to playing in Hickory, Gwaltney was a member of the Charlotte Hornets  professional baseball organization and played for teams in Lincolnton and Statesville.
After baseball, he turned to softball where the burly left handed slugger was known for his towering home runs as he played locally for more than 30 years. While playing softball, Gwaltney also served as a deputy for the Alexander County Sheriff’s Department and operated a chicken house on his property.
In 1985, The Taylorsville Times and Alexander County Recreation Department held a vote to choose living legends in the county to participate in a special softball event. Gwaltney was the leading vote getter in the contest. In addition, he was selected to play in a special legends batting contest at the Hickory Crawdads’ park, LP Frans Stadium, in 1993.
In 2002, Gwaltney was honored when a field at Dusty Ridge Park was named in his memory.
Gwaltney was born September 19, 1926, and passed away December 7, 1993. He and his wife Drusilla lived in the Stony Point Community and were the parents of five children: Eddie, Gary, David, Jimmy, and Cindy. Gwaltney’s softball legacy in the county can still be seen today. His great-granddaughters, Kiana and Chesney Millsaps,  were star players for Alexander Central State Championship winning teams in 2013, 2014, and 2018.
• • • • •
Next to the induction stage was retired golf professional and lifelong Alexander County resident Jeff Isenhour. Isenhour, who starred at Taylorsville High School as a three sport athlete, spoke of the appreciation and humility he felt and talked about his love for people and Alexander County.
“I enjoy people. People like you are why I am here…the fine people of Alexander County. There is no other place I would want to live,” an emotional Isenhour quipped. “I am so honored and humbled to be a part of this Hall of Fame and I thank the Hall of Fame selection committee and the Alexander County Education Foundation for everything.” 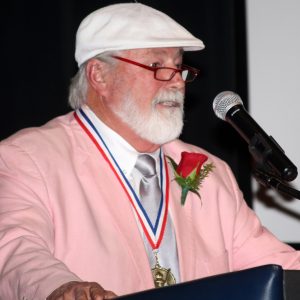 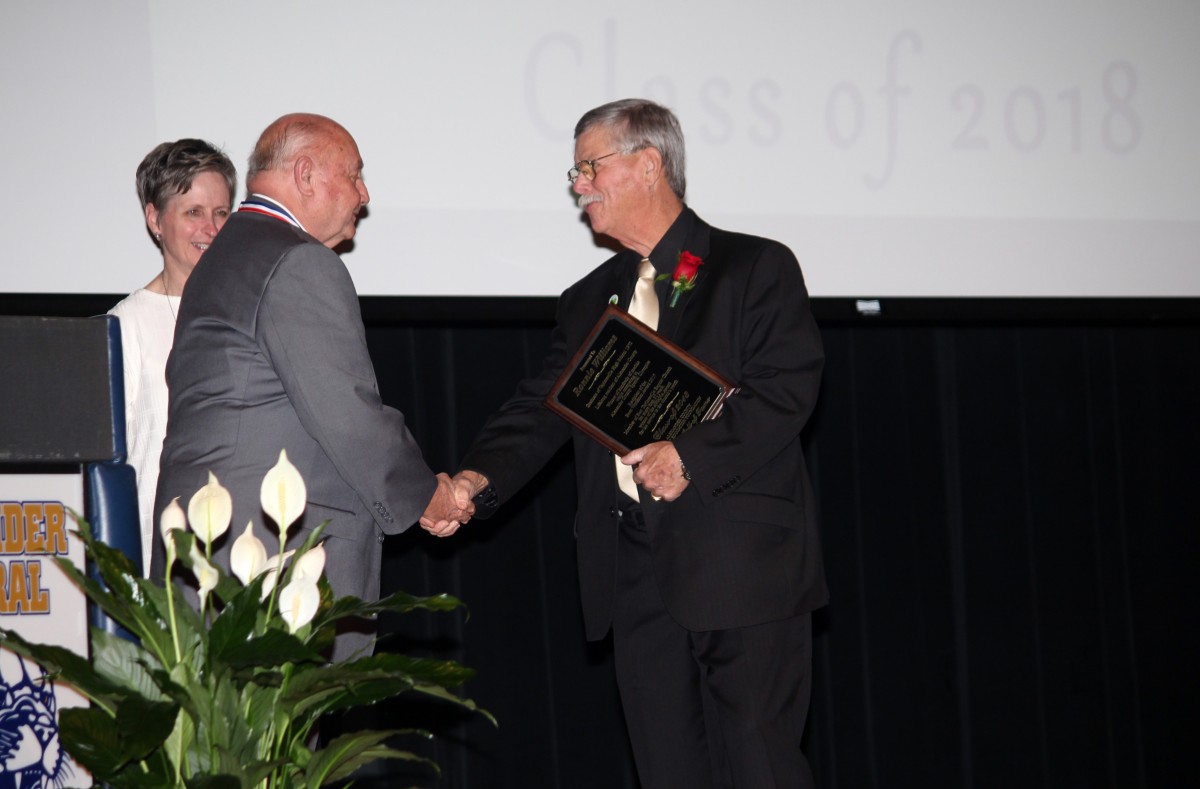