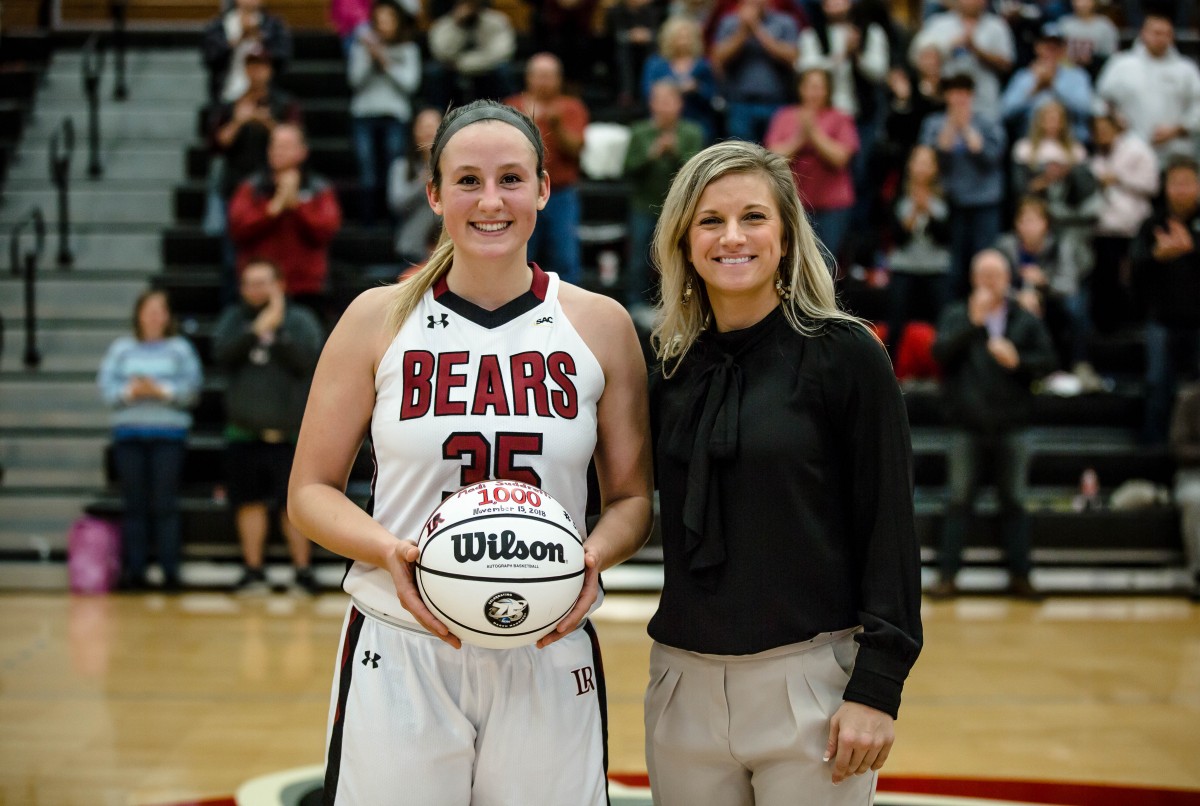 Madi Suddreth is pictured with LR Coach Cam Sealey prior to the Lady Bears’ home game on Nov. 20. The coach presented Suddreth with a special game ball to recognize her 1000th point at the school. She achieved the mark on November 15 against Pembroke.

Former Lady Cougar is 21st Bear to reach the mark

Pembroke, N.C. – The Lenoir-Rhyne University Women’s Basketball Team have been battled tested so far this season, and relied on veteran leadership for the first victory of the year, 63-58 over UNC Pembroke, on Thursday night, November 15.  Senior Madi Suddreth scored the Bears’ first points of the game, eclipsing the 1,000 career points mark.

STATS OF THE GAME:
•    After trailing at the end of the first quarter, 16-7, the Bears put the pressure on the Braves and went on a 17-5 scoring run to end the half. The Bears held the home team to just 25.8 percent shooting from the field in the first half and 31.6 percent for the game.
•    The Bears failed to get to the charity stripe as much as the Braves, but used them at the most critical time to secure the victory at the end of the game, hitting five of their 12 free throw makes in the final two minutes to close out the game.
•    LR managed to outshoot the home team, hitting 38 percent from the floor while the Braves were limited to just under 32 percent. The Bears also managed to shoot well from beyond the arc, hitting 46 percent of their long range shots while UNC Pembroke only hit 32 percent from that distance.
•    The Bears were outrebounded on the road, 43-36, but committed 15 turnovers as the Braves had 17 of their own, resulting in 16 points off those turnovers for LR.
•    Kendall Toineeta led all scorers with 18 points on the night, one of three Bears to score in double-figures. Ashley Rodriguez put up 12 while Madi Suddreth scored 10 of her own. Suddreth flirted with a double-double with eight rebounds to lead the team.

BEYOND THE BOX SCORE:
•    It was Suddreth’s time to shine as the senior went over the 1,000-mark in points in her LR career with her first basket of the night. She is the 21st player in school history to reach this mark.
•    Suddreth also has scored in double digits in six-straight games dating back to last season, even with her scoring well below her 20.5 points per game this year in the first two contests.
•    Toineeta’s 18 points is her third-highest scoring effort, and the most since last year’s 25-point career-high performance against Catawba on Jan. 3, 2018.
•    11 made three pointers is the most for the Bears since last season’s 90-79 win against Mount Olive on Nov. 11, 2017, when LR knocked in 12.