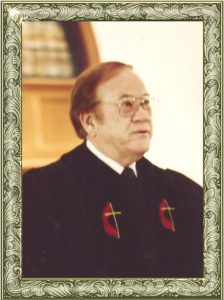 Rev. Wade Edward Wright, 88, of Hiddenite, passed away Thursday, November 22, 2018 at his residence.

Wade was born March 7, 1930, in Forsyth County, the son of the late John Henry Wright and Minnie Lunsford Wright.

He was a US Army veteran and a loving husband, father, and grandfather. He pastored numerous Western United Methodist Conference Churches during his pastoral service career. He lived his life serving and ministering to people. He loved to share God’s blessings with others and enjoyed visiting the nursing homes and shut-ins.

He was a volunteer fireman at Hiddenite Fire Department for a number of years. Wade loved to garden and loved taking his grandchildren on day outings and was excited about the newest addition to the family coming in December, great-great-grandson, Knox.

Including his parents, he was preceded in death by a sister, Iva Esteele W. Reeves; brothers, Carl Venson Wright, and John H. Wright, Jr. and wife Bertha; and a brother-in-law, R. G. Wooten.

Those left to cherish his memory include the love of his life, who he married on June 23, 1951, Anna Mae Reeves Wright; two daughters, Kathy W. Durmire and husband Allen, and Carol W. McLain and husband Barry, all of Hiddenite; two grandchildren, Brent Durmire and wife Emily of Taylorsville, and Jessica McLain of Conover; four great-grandchildren, Kallie McLain, Maliyah McLain, Grace Durmire, and Quinlyn Durmire; a sister, Margaret Julia W. Wooten of Turkey Foot; a brother-in-law, Wade Reeves; a sister-in-law, Minnie Ruth Wright; along with many nieces and nephews.

The funeral service will be at 3 p.m., Sunday, November 25, 2018 at Adams Funeral Home Chapel. Pastor Doug Houchmouth and Rev. Donnie Durham will officiate. Burial will follow in the Hiddenite Cemetery with full military honors accorded by DAV Chapter 84 of Taylorsville and Chapter 6 of Hudson. The family will receive friends from 6-8 p.m., Saturday, November 24, 2018 at Adams Funeral Home.

Adams Funeral Home and Cremation Services is honored to be serving the Wright Family.