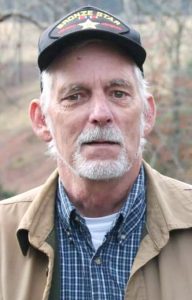 Mr. Craig was born on January 23, 1947, in Caldwell County, the son of the late Ed Kirby and Thelma Lee Craig Mitchell.

He was a US Army veteran, who had served in the Vietnam Era. He had worked as a lumberjack and also had worked in the furniture industry. He was a member of Clear Vision Baptist Church in Statesville. He was an avid Rook player and also enjoyed going fishing. He loved his children, grandchildren, family, and his dog.

Including his parents, he was preceded in death by a daughter, Samantha Craig, and a sister, Nathalee Baker.

A Celebration of Life service will be held at 2 p.m., Sunday, December 2, 2018 at Adams Funeral Home Chapel. Pastor Jason Buchanan and Pastor Dan Spears will officiate. Interment will follow in the Rocky Hill Baptist Church Cemetery with full military honors accorded by DAV Chapter 84 of Taylorsville and Chapter 6 of Hudson. The family will receive friends one hour prior to the service.

Adams Funeral Home and Cremation Services is honored to be serving the Craig Family.