An inmate, already in custody of the state prison in Taylorsville, has been arrested for allegedly sending a letter which threatened that bombs would be placed in the prison and local schools.

On Thursday, November 15, 2018, the Alexander County Sheriff’s Office (ACSO) was notified by personnel at the Alexander Correctional Institute about a letter that was mailed to Legal Services in Raleigh. The letter had a return address from an inmate at the correctional facility. The letter was a threat to blow up the prison, and the three closest schools to the prison, if prison authorities did not clear up an internal matter concerning the inmate. It is believed this was the reason for the writing of the letter, according to Sheriff Chris Bowman.

Detectives went to the Alexander Correctional Facility on Nov. 15th and interviewed that particular inmate. On Friday, a second interview was conducted with the inmate. Further investigation was needed before an arrest could be made.

On Monday, November 19, 2018, the inmate was interviewed again. Detectives obtained the original letter and it was sent to the NC Crime lab to be analyzed for fingerprints and DNA. A rush was put on the request due to the threats made to the educational facilities and the prison.

Then on Wednesday, November 21, 2018, detectives were notified of a match to the DNA found on the envelope. The offender was an inmate at Alexander Correctional; however, it was not the inmate on the return address of the envelope. 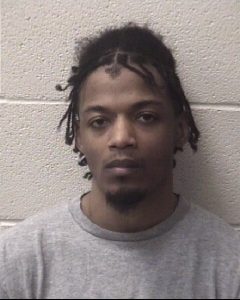 The offender was identified as Sadarius Trumane Douglas, age 24. Warrants were obtained on Douglas for Threat of Mass Violence on Educational Property (3 counts) and one count of Making a Threat of a Destructive Device on the prison.

Douglas was brought to the ACSO for processing on Monday, November 26, 2018. His first court appearance on these charges was on the same day and he was placed under a $150,000 secured bond. He will remain in the custody of the NC Department of Public Safety, Division of Prisons.

Throughout the investigation, the Sheriff has maintained communication with school administration, prison personnel, state, and federal authorities. Enhanced law enforcement security was put in place at all schools in Alexander County by the Sheriff’s Office and NC Probation officers, to ensure the safety of the children and staff.

The investigation is still continuing to determine if others may have been involved inside or outside of the prison. The Sheriff’s Office worked closely with all agencies to find out the identity of the offender as quickly as possible, said Bowman.