FOREST, Va.– The Old Dominion Athletic Conference announced the Men’s Basketball Player of the Week on Monday, November 26. Randolph sophomore Justin Dula (Taylorsville, N.C./Alexander Central) was bestowed with the honor for the first time in his career. 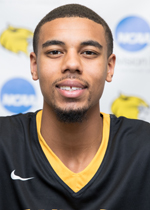 Randolph Sophomore Justin Dula is the ODAC Player of the Week.

Last week at Greensboro, Dula scored a career-best 20 points on 8-of-9 shooting to lead Randolph to an 89-79 victory over the Pride. On Sunday against Bridgewater, Dula pulled down a career-high 16 rebounds and added nine points in the Wildcats’ 74-73 victory. The 16 rebounds were the most in a game for a Wildcat player since Derrick Woods-Morrow last did it in 2012.
In two games, Dula was 11-of-19 (57.9%) from the floor and 7-of-10 from the free throw line. He also dished out a total of six assists and only turned the ball over once.

Justin is the son of Monica & Thomas Dula of Taylorsville.