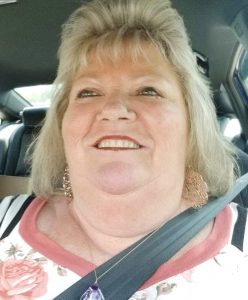 Penny Leigh Bentley Kerley, 56, of Taylorsville, left this world for her heavenly home on Saturday, December 8, 2018 at her residence.

She was born on December 10, 1961, in Wilkes County, the daughter of the late Herman A. and Shirley B. Bare Bentley. During her career, she worked as a weaver at Schneider Mills and was a member at Millersville Baptist Church.

Those left to cherish her memory include her husband of 25 years, Alan Wayne Kerley of the home; daughter, Jamie Moretz of Bethlehem; step-son, Casey Alan Kerley of Taylorsville; step-daughter, Tausha Mays of Taylorsville; and sister, Frankie Bare Stamper of Lenoir.

The family will receive friends on Thursday, December 13, 2018 from 2:30 p.m. – 3:45 p.m. at Millersville Baptist Church. The funeral service will follow at 4:00 p.m. with Rev. Bill Orren and Rev. Bill Bentley officiating with cremation to follow. Inurnment will be with the family.