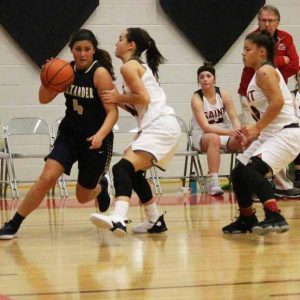 The Alexander Central Varsity Women’s Basketball Team picked up its first win of the season in a 45-34 victory over the St. Stephens Indians in the opening game of the Dicks Sporting Goods Classic on Thursday morning.

ACHS led 20-18 at the half and stretched its lead to double digits en route to its first win of the season.

With the win over the second-seeded Lady Indians, ACHS advances to round two on Friday, December 28, at CVCC. The Lady Cougars will face the winner of today’s Hickory vs. South Caldwell game.