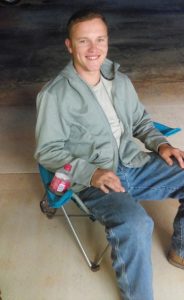 Paul Milton Treadway, 23, of Hiddenite, gained his wings and flew in the arms of Jesus on January 9, 2019 at Sunset Beach.

Paul owned and operated General Auto Service in Hiddenite. He enjoyed spending time with his family and friends (which were many, young and old) and especially his papa, who he worked with as a mechanic.

Paul loved fishing, camping, golfing, mountains, kayaking, and beach trips most of all. The beach was his happy place, where he could spend time with Larry, and Shelby Tilley and Jazzy. Paul was always ready to lend a helping hand; he would cut and deliver wood to the elderly and never charge. Paul would say, “what I do for people, good will come back.”

He started working at a young age on our neighbor’s farm (the Burgesses, whom he thought of like a family). He then started building and racing lawnmowers, where he gained the nickname Stime at the age of 12 years old. His lifelong dream was to race NASCAR and to have his own garage, which he accomplished.

Paul loved everybody and liked giving people second chances in life, no matter the circumstances. Paul loved being able to look after moma. He would call every day to say, “Just checking on you, and you know I love you.” He was always helping his older brother, John, to do anything he wanted to do.

Paul would work 40 to 60 hours per week because that was just what he did. Taking care of papa and his other moma, always going every day just to check on them, never leaving without a hug and I love you. Paul will be missed by all that knew him, and all of his other parents, Rodney and Trish Roberts and Larry and Shelby Tilley.

Paul was preceded in death by his namesake uncles, Paul Milton Treadway and John Henkle Treadway.

Those left to cherish his memory we hold in our hearts include his mother, Diane Treadway; three brothers, his twin brother, John Treadway, San Church of South Carolina, and Andrew Church of Bakersville; grandparents, Buster and Evelyn Treadway; and many uncles, aunts, nephews, and nieces.

Condolences may be e-mailed to the Treadway Family by visiting our website at www.chapmanfuneralhome.com.