HICKORY, N.C. — Four players with ties to the Catawba Valley Community College baseball program have been selected by College Baseball Newspaper to the publication’s “Players to Watch” list.
Current Red Hawks Trae Starnes, Garrison Burress and Logan Bender were all named to the list while former CVCC standout and current Western Carolina senior pitcher Taylor Purus was also honored by the publication in its Jan. 4 edition. 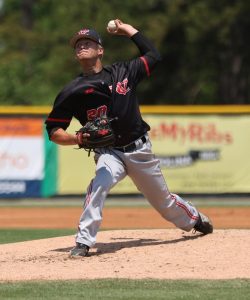 Starnes’ best performance of the season came in the Region X/Southeast District tournament against Pasco-Hernando on Mother’s Day, where he allowed just five hits, two walks and one earned run in a 7-1 complete game victory against the Bobcats.
Burress, a 6-1 shortstop from Granite Falls, N.C., returns to the team after finishing in the top three in multiple offensive categories, including hits (64 – third), doubles (15 – second), triples (3 – first), home runs (7 – second) and RBI (45 – second).
The sophomore also had a .346 batting average, .435 on-base percentage, .573 slugging percentage and finished with the second-most extra-base hits for the Red Hawks last season (25) en route to being selected by the Arizona Diamondbacks in the 40th round (1,209th overall) in the 2018 Major League Baseball First-Year Player Draft.
Bender, a 6-foot right-handed pitcher, transferred to Catawba Valley after earning All-American status and Big South Freshman of the Year honors on the mound during his only season at Campbell University. He went 5-2 with the Camels with a 3.42 ERA and 64 strikeouts in 47.1 innings pitched. Opposing batters also hit just .199 against him.
The sophomore from Dunn, N.C. threw 88-92 miles per hour on the mound this past fall. He has committed to play baseball at North Carolina State University next season — becoming the second Red Hawk in as many years to sign with a Power Five school.
Purus, a redshirt senior left-handed pitcher, enters his final season with the Catamounts after leading Western Carolina with 100 strikeouts. He also tied for the team lead in wins last spring.
In his team-best 15 starts, the former South Caldwell High School standout recorded five or more strikeouts in 11 of those starts for Western. Some of Purus’ best performances came during the Southern Conference tournament, where he earned the win against top-seeded UNC Greensboro in the tournament’s opening round. He finished the tournament tied with a team-high 15 strikeouts.
The Catawba Valley Community College baseball team kicks off its season on Saturday, Feb. 9 at USC Union in a doubleheader that is scheduled to start at 1 p.m.