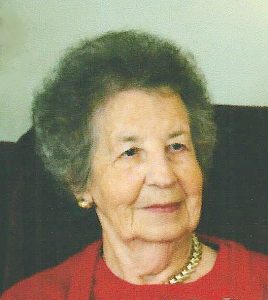 Bernice was born August 17, 1927, in Alexander County, the daughter of the late John C. Deal and Delia Wike Deal.

Bernice had worked as an executive in management for Southern Bell, in Charlotte, before retiring. She was a member of First United Methodist Church in Taylorsville. She had a heart of gold, and was always available to help when the need arose. She enjoyed working in her yard and flowers.

Including her parents, she was preceded in death by her husband, Raymond Griffin; two sisters, Mildred Kerley and Shirley Deal; and a brother, Shuford Deal.

Those left to cherish and honor her memory include a sister, Juel Brafford and husband Delaney of Taylorsville; sister-in-law, Jackie Deal of Taylorsville; nieces, Nancy Alexander, Diane Fox, and Lavonda Weaver; nephews, Terry Kerley and Ricky Deal; and a number of great and great-great nieces and nephews and friends.

The funeral service will be held at 2 p.m., Friday, January 18, 2019 at the First United Methodist Church in Taylorsville. Pastor Joel Simpson will officiate. Burial will follow in the Taylorsville City Cemetery.

Pallbearers include: Chris Welborne, James Welborne, Garrett Fox, Chad Kerley, Cory Alexander, and Justice Morrison. The family will receive friends one hour prior to the service.

Adams Funeral Home and Cremation Services is honored to be serving the Griffin Family.