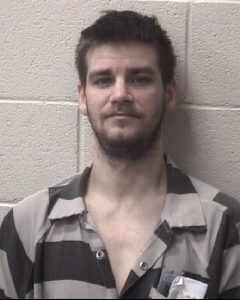 A local inmate in the county jail is back in custody following his escape in Taylorsville.

On Thursday, January 17, 2019, at approximately 9:00 p.m., inmate Jason Todd Mullen, W/M age 33, of Statesville, was assisting two other inmates, along with a detention officer, in removing trash from the Alexander County Detention Center to be put in the dumpster, stated Alexander County Sheriff Chris Bowman.

Mullen was later located on Highway 90 East, near the solar panel farm in Hiddenite. The stolen truck was located in a muddy field by officers. When officers were approaching the truck, they could hear Mullen trying to get out of the mud by revving the engine. Mullen was unable to get out of the mud with the truck. Mullen exited the truck and ran, leaving the vehicle behind.

The Alexander County Sheriff’s Office K-9 was sent in to assist in the tracking of the inmate, although the K-9 was unable to locate Mullen.

At this time, Iredell County’s bloodhound handler was asked to respond to the scene. The bloodhound unit responded and was given a scent article. The bloodhound tracked a trail to an abandoned mobile home off of Highway 90 East.

Mullen was located inside the abandoned mobile home and was taken into custody at approximately 4:30 a.m. on Friday, January 18, 2019. The escapee was transported to the Alexander County Detention Center, after which he was taken to a local hospital for medical clearance.