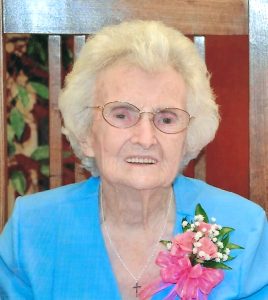 Nellie Marie Tevepaugh Burgess, 98, of Taylorsville, passed away on January 19, 2019 at Gordon Hospice House, in Statesville, after a decline in health of three weeks.

Born July 7, 1920, in Taylorsville, Nellie was the oldest daughter of the late Joseph Graham Tevepaugh and Delia Ann Harrington Tevepaugh. She married Roland Eugene Burgess on May 19, 1945, and they celebrated 62 years of marriage until Roland’s death in 2007.

Nellie graduated from Taylorsville High School, Class of 1938. She was a lifelong member of Salem Lutheran Church and was involved in many activities, particularly in later years, the Ladies’ Circle, the Bereavement Committee, and the Altar Committee. At the time of her death, she was the oldest member of the congregation.

Nellie and Roland were active in the Sugar Loaf Community, always being eager to help a friend or neighbor in need and assisting the Sugar Loaf Fire Department and their church. Nellie enjoyed traveling, visiting the sick, reading, cooking, sewing and making crafts, and doing word searches. She always said she had her Bible and word searches to keep her occupied.

The family is especially appreciative of her caregivers: niece, Brenda Miller, Linda Goins, Cathy Lackey, Kirby McCurdy, Louise Pennell, Cindy Watson, and Effie Deal. Much appreciation is extended to Gordon Hospice House for their loving and exceptional care provided to Nellie and her family.

The funeral service will be conducted at 3 p.m., Monday, January 21, 2019 at Salem Lutheran Church. Rev. Reed Shoaff will officiate. Burial will follow in the church cemetery. The family will receive friends prior to the service from 1:30 p.m. until 2:45 p.m. at the church.

In lieu of flowers, memorials may be made to the Salem Lutheran Church Building Fund, 4005 NC Highway 16 N, Taylorsville, NC 28681; or Hospice and Palliative Care of Iredell County, 2347 Simonton Road, Statesville, NC 28625.

Chapman Funeral Home of Stony Point is in charge of arrangements.

Condolences may be e-mailed to the Burgess Family by visiting our website at www.chapmanfuneralhome.com.