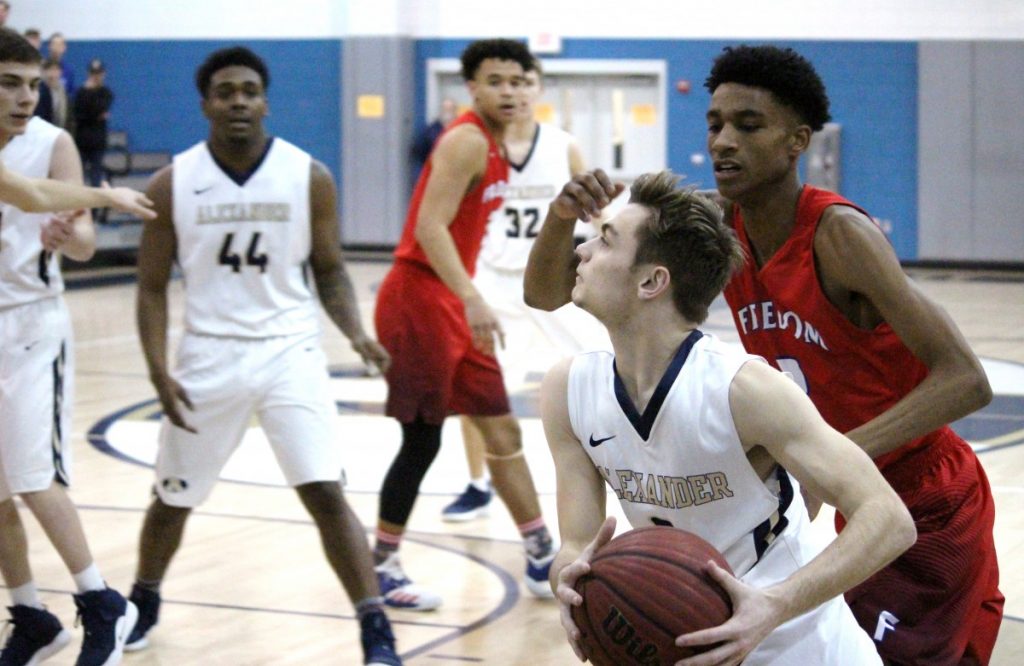 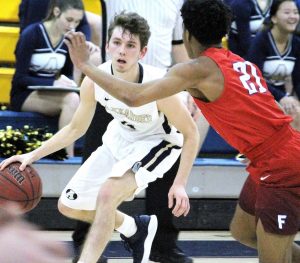 Dalton Stikeleather breaks the Freedom press during the first half Wednesday.

By D.N. PENNELL, Jr.
The Freedom High School Patriots put their unbeaten NWC varsity records on the line in games against the Alexander Central Varsity Cougar Teams on Wednesday evening, January 30, in Taylorsville.
At the end of the evening, the Patriot squads left Taylorsville with their perfect NWC marks intact.
In the varsity opener, the league leading Lady Pats cruised to a 46-26 win over Alexander Central, running their conference mark to 8-0. Freedom upped its overall record to 17-1 with the win.
Alexander slipped to 1-18 overall and remained winless in the league with an 0-9 mark.
Freedom built a 19-7 lead after one frame and never trailed in the game en route to the 20-point win. The Lady Pats scored 28 points off 32 Cougar turnovers.
For Alexander, Gracie Harrington came off the bench to lead the scoring with nine points. Lanie Hammer chipped in with eight points, while Nikki Hagy scored seven points and grabbed seven rebounds.
Freedom’s Madison Bailey was the game’s overall leading scorer with 15 points.
BIG THIRD LIFTS FREEDOM MEN TO VICTORY
The varsity nightcap saw the Freedom Patriot men break open a close game with a huge third period, leading to a 67-41 win over the ACHS Varsity Men.
ACHS (13-6, 6-3) played the talented Patriots tough for two periods before the visitors from Morganton pulled away in the second half.
Behind 12 first-period points from Jem Lowrance, Alexander held a slim 16-15 lead at the end of the initial quarter. Freedom rallied in the second stanza to carry a 28-24 lead to the locker room at the intermission.
The game was eventually decided in the third period. The Patriots stormed out of the halftime break and outscored the Cougars 25-7 in the third stanza to seize control of the game. Freedom added to its advantage in the fourth period, outscoring the home team 14-10.
Jakari Dula of Freedom was the star of the contest for the Pats. Dula hit four of seven three-point attempts and finished a perfect seven for seven from the foul line. He finished with a game-high 25 points in 25 minutes. Michael Logan added 19 points for Freedom as the Patriots improved to 17-1 overall and 8-0 in NWC contests.
Lowrance paced Alexander Central’s effort with 16 points. Lyndon Strickland added 10 points, while Maddox Kerley came off the bench to add eight points.
On the night, Freedom shot 56 percent from the floor, while limiting the Cougars to just 35 percent on field goal attempts.
STIKELEATHER’S HUGE GAME LIFTS JV WOMEN
The Alexander Central JV Women’s Team upped its record to 15-0 on the season with a 41-36 win over Freedom in the opening game of the day.
Behind a season-high 19 points from Chesney Stikeleather, the young Lady Cougars topped the Pats to remain perfect on the season. 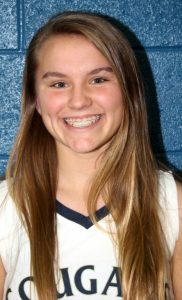 ACHS led by just two points at the half. The game remained close until the final period when the home team outscored Freedom 16-11.
Stikeleather’s effort paced all scorers in the game. Guard Peyton Price added seven points for ACHS in the win, while Madeleine Jenkins chipped in with five points.
JV MEN’S WIN STREAK SNAPPED
Alexander Central’s JV Cougar Men’s Team had its three-game win streak snapped in a 57-44 loss to Freedom in action on January 30.
Freedom outscored the Cougars 41-24 over the second and third periods to grab control of the game.
Luke Johnson led the Cougars with nine points in the loss. Peyton Payne and Mason Hubbard scored eight and seven points respectively.
The ACHS Teams will host St. Stephens in games on Friday, February 1, in the Cougar Den. St. Stephens does not field a JV women’s team. Games will begin with JV men’s action at 4:30 pm in the Cougar Den.