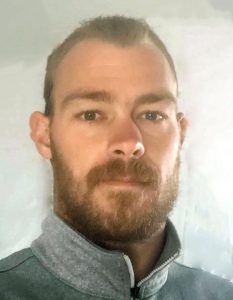 Eric was born March 28, 1990, in Iredell County, the son of Tammy Transeau Harmon and the late Jeffery Dale Nunnery.

Eric was a graduate of Forsyth Tech, where he earned his associate degree as a veterinary technician; Eric loved animals of all kinds.

Eric loved God and attending church, he was a member of Tree of Life Ministries. Eric had a heart of gold and would give anyone the shirt off of his back. Eric adored children and spending time with friends and family. One of Eric’s favorite pastimes was playing video games with his brother, Nathan. Some of Eric’s hobbies included fishing, swimming, and running. Eric completed several marathons and triathlons.

Including his father, he was preceded in death by his grandparents, uncle, Michael; aunt, Robin; and cousins, Amanda and Nicole.

Including his mother, those left to cherish and honor his memory include his fiancée of three years, Katelynn Jude of Mentor on the Lake, Ohio; brothers, Steven Transeau and Nathan Nunnery, both of Taylorsville; special aunt and uncle, Emily and Blaine Blankenship; special nieces and nephews, Maysie, Madyson, and Malachi; very special cousins like brothers, Blaine Blankenship II and wife Kimberly of Hiddenite, and Jonathan Blankenship and wife Maranda of Taylorsville; special cousin, Travis Transeau of Conover; future-in-laws, Kevin and Suzanne Novak of Ohio, and sister-in-law, Lynn Jude; and very special mentors, Keith and Emily Davis, and Jeff and Kim Ickes, all of Winston-Salem.

The funeral service will be held at 3 p.m. Monday, February 11, 2019 at Tabernacle Baptist Church, Stony Point. Rev. Wes Hammer and Dr. Sam Vallini will officiate. Burial will follow in the church cemetery. The family will receive friends one hour prior to the service.

Adams Funeral Home and Cremation Services is honored to be serving the Nunnery Family.