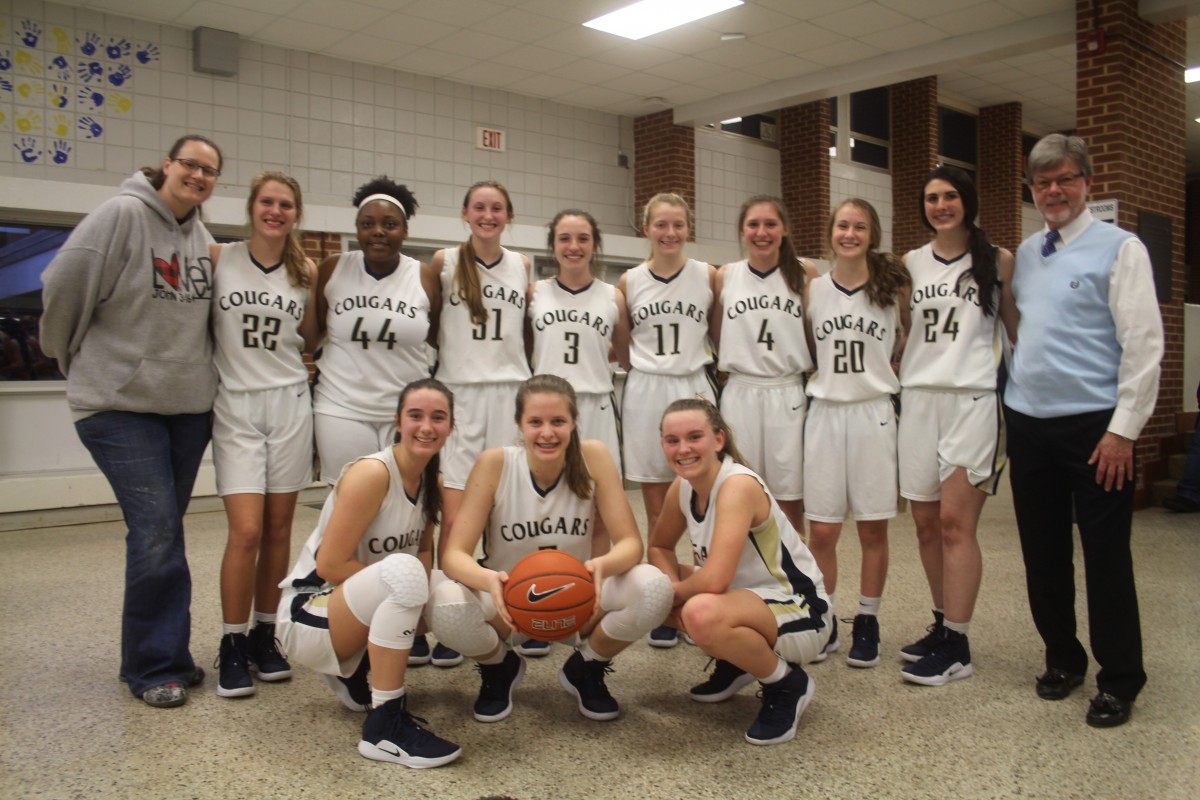 By D.N. PENNELL, Jr.
The Alexander Central JV Women’s Basketball Team survived a late rally by visiting Hickory High to win its final game of the season and close a perfect regular season on Tuesday, February 12.
The young Lady Cougars held off Hickory down the stretch to win a hotly-contested game 36-30. The win closes the books on an unbeaten campaign for Coach Larry Sharpe and the Lady Cougars. Alexander’s six point home win on Tuesday upped the team’s final record to 18-0. The squad finished NW 3A/4A play with an immaculate  8-0 mark.
Alexander led 22-9 at the half and looked poised to cruise to another one-sided win. However, Hickory rallied in the second half and trimmed the lead to two points in the game’s closing moments. The Lady Cougars managed to seal the deal at the foul line as the final margin grew to six points at 36-30.
Freshman Chesney Stikeleather’s recent streak of hot play carried into Tuesday’s finale. In the contest, Stikeleather tallied 18 points to lead the Alexander offensive effort. Peyton Price added five points, while Anna Taraban tallied four points in the win.
BIG SECOND PERIOD LIFTS JV TORNADOES
The Hickory JV Men’s Team rallied from a first period deficit to take a 53-38 win over ACHS in the second contest on Tuesday.
Hickory used a 19-1 run in the second period to secure control of the game and send ACHS to the 15-point loss.
For Alexander, Grove Lowrance set the pace with 13 points. Zach Herman scored seven points, while Dusty Sigmon and Colby Abernathy added five points each.
The JV Cougars will close their regular season on Friday evening, February 15, when they host South Caldwell at 4:30 pm.
HHS VARSITY SWEEPS PAIR
In Tuesday’s varsity action, Hickory High posted a pair of one-sided wins over the home-standing Alexander Central squads.
The Lady Red Tornadoes topped Alexander Central for the third time this season in a 61-48 decision on Tuesday evening.
The win upped Hickory’s league mark to 9-4, while ACHS slipped to 2-21 and 1-12 in conference action.
Hickory forced the home team into 36 turnovers which resulted in 31 points for the visitors.
The Lady Tornadoes built a 34-16 lead at the intermission and managed to hold the home team off the remainder of the way. Hickory’s lead grew to as many as 21 points in the third period before ACHS managed to trim the final margin to 13 points.
Teagan Pennell hit four of eight three point shots and finished with 13 points to lead ACHS. Lanie Hammer added 11 points for the Cougars in the loss.
In the final game of the day, Hickory built a 21-3 lead after one period and cruised to a 61-43 win over Alexander in the varsity men’s clash.
Hickory improved to 18-4 overall and 11-2 in the NWC with the win. The loss dropped Alexander to 15-8 overall and 8-5 in the league.
Davis Amos led Hickory’s 55 percent shooting night with a four for six effort from behind the three point line. Amos led Hickory with 15 points.
For Alexander, junior Jem Lowrance turned in another strong offensive effort. Lowrance shot seven for nine from the field and six for seven from the foul line to finish with a game-high 20 points.
ACHS TO HOST SOUTH CALDWELL FOR SENIOR NIGHT
On Friday, Alexander Central will host the South Caldwell Spartans for Senior Night in the Cougar Den.  The games will mark the close of the regular season for the Alexander Central Teams. The day will tip off with JV men’s action at 4:30 pm. Varsity contests will follow.