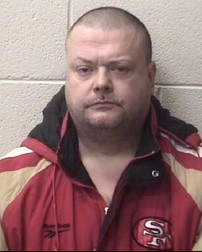 Local authorities have charged a Taylorsville man with multiple sex offenses with a child.

On Monday, February 4, 2019, Investigators from the Alexander County Sheriff’s Office were notified about a possible sexual assault of a child.  Further investigation revealed that the suspect in this case is 47 year old Roger Lee Dyson, Jr.,  of Taylorsville.  As a result of the investigation, Mr. Dyson was charged with 1 count of First Degree Statutory Rape of a Child Under 13, 4 counts of First Degree Statutory Sex Offense with a Child Under 13, and 4 counts of Indecent Liberties with a Child.

The investigation revealed that these encounters allegedly occurred in Alexander County between August and October of 2018.  On Thursday, February 14 2019, Mr. Dyson was arrested at his residence and taken to the Alexander County Detention Center where he was placed under a $1,500,000 Secured Bond.  Dyson is scheduled for his first appearance on Monday, February 18, 2019, in District Court in Taylorsville.  This case is still under investigation.