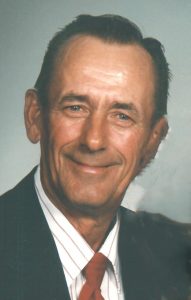 Mr. Warren was born November 28, 1929, in Alexander County, the son of the late Ross Warren and Bonnie Icenhour Warren.

He was a US Army veteran who served during the Korean Conflict. In his earlier years, he had worked for Southern Furniture building church pews, and also worked for the City of Hickory until his retirement. He was a member of Liberty United Methodist Church. Billy enjoyed running Beagles in field trials, and enjoyed hunting. He was a member of DAV Chapter 84 of Taylorsville.

Including his parents, he was preceded in death by two sisters, Edna Icenhour and Edna Jolly; and two brothers, Jimmy Warren and Garland Warren.

The funeral service will be held at 3 p.m., Thursday, February 21, 2019 at Adams Funeral Home Chapel. Pastor Robert Herron and Pastor Donnie Durham will officiate. Burial will follow in the Liberty United Methodist Church Cemetery with full military honors accorded by DAV Chapter 84 of Taylorsville. The family will receive friends one hour prior to the service.