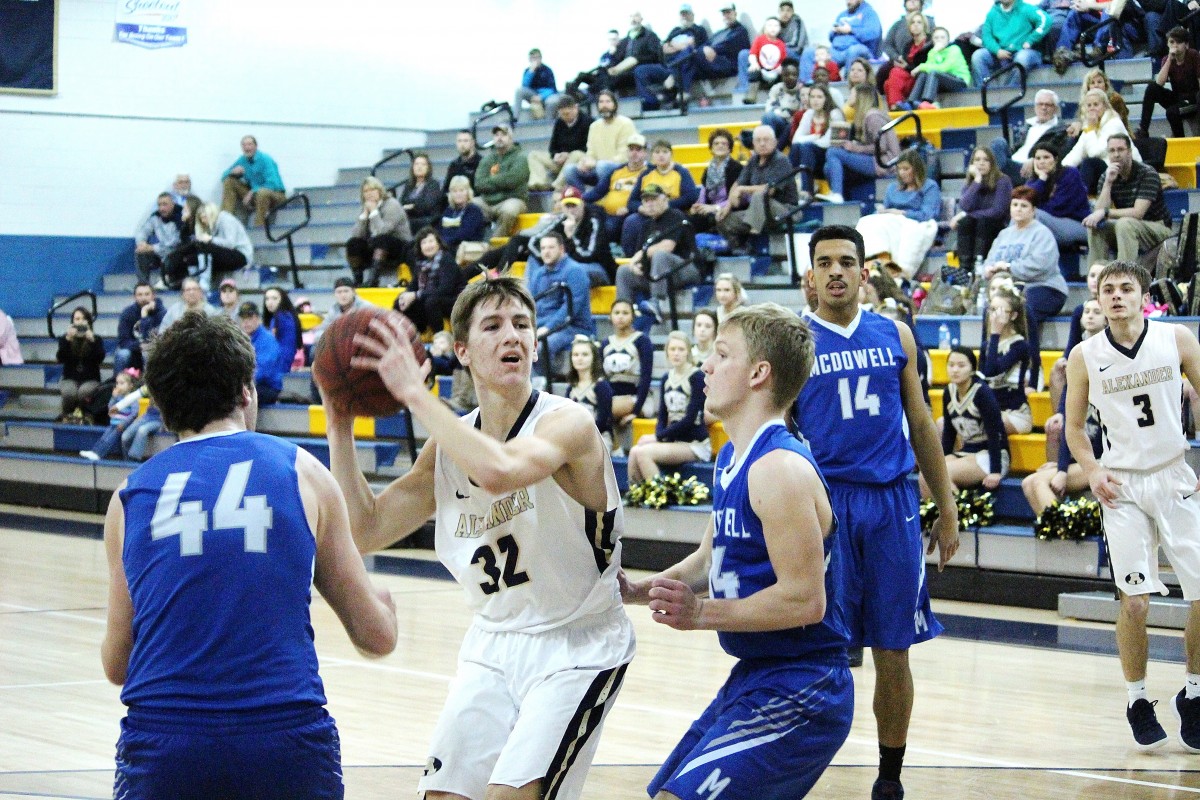 ANOTHER BIG NIGHT – Jem Lowrance moves toward the lane during Tuesday’s tourney game vs. McDowell in Taylorsville. Lowrance tallied a double-double with 25 points and 11 rebounds.

By D.N. PENNELL, Jr.
The Alexander Central Varsity Men’s Basketball Team shook off a slow start to claim a 70-65 victory over the McDowell Titans in the  opening round of the NW 3A/4A Tournament on Tuesday evening, February 19, in Taylorsville.
After trailing by nine points early, the third-seeded Cougars heated up down the stretch  and finished the game with a 56 percent shooting average on field goal attempts. Alexander hit eight off 11 three-point shots on the night for a whopping 73 percent average.
The hot outside shooting for the Cougars allowed the team to thwart a McDowell upset bid which was fueled by the play of guard Dylan McRary. The Titan sharpshooter hit 12 of 18 shots from the floor and finished the evening with a team-high 33 points. 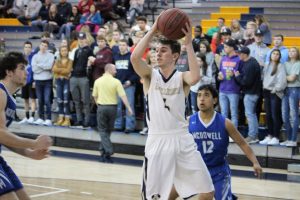 Alexander guard Dalton Stikeleather controls a bullet pass during the opening round win in the Cougar Den. Above, Alexander’s Maddox Kerley makes a strong post move during the Titan defense.

However, McRary’s efforts were not enough to knock off leading scorer Jem Lowrance and the Cougars. Lowrance, who averaged better than 16 points a contest, had another huge night in Tuesday’s win. The junior forward finished with 25 points and yanked down 11 rebounds to post a double-double.
Lowrance’s scoring, coupled with inspired play from juniors Zach Wooten, Jamison Benfield, and Dalton Stikleather proved to be enough to help Alexander advance to the tourney semi-finals on Thursday evening at Hickory High School.
Wooten hit four-of-four shots from three-point range and was perfect on two free-throw attempts to finish with 14 points.
Benfield provided a key spark off the Cougar bench throughout the night. The guard keyed one run in the first half with a steal and breakaway layup. In the second half, Benfield reigned in a pair of crucial three pointers. On the night, Benfield finished with a dozen points.
Stikeleather also enjoyed a perfect night shooting the ball for ACHS. The junior hit all three of his field goal attempts and was three-for-three at the foul line for nine points. He also tallied four assists and a pair of steals.
The game, which was tight from start to finish, featured seven lead changes and came down to the final minute before the eventual result went in Alexander’s favor. Key foul shots by Lowrance, Stikeleather, and Wooten in the final stages of the game sealed the win and helped the Cougars advance to the round-of- four in the NWC Tourney.
I thought that Jamison, Zach, and Dalton were really good tonight. They each provided a spark at important times.  It is great to see the ball go in the basket for them,” Alexander Coach Ed Wills said after the win. “Jem made some tough shots tonight. He can score in so many different ways as he is really hard to guard. He was also  big on the boards for us  tonight.”
Wills also praised the play of McDowell Dylan McRary, who almost single-handedly kept the Titans in the game with his shooting and hustle.
“ McRary went through a stretch where I wasn’t sure if he was going to miss. Every time,  I thought we could pull away a little bit he would make a big shot. He was really good,” Wills added.
The win lifted the Cougars to 17-8 on the season. They will travel to Hickory High School for a semi-final game against Hickory High School on Thursday night, February 21. The Tornadoes advanced to the semi-finals with a home win over West Caldwell on Tuesday. The third matchup of the rivals will be the fourth and final semi-final game of the day on Thursday. 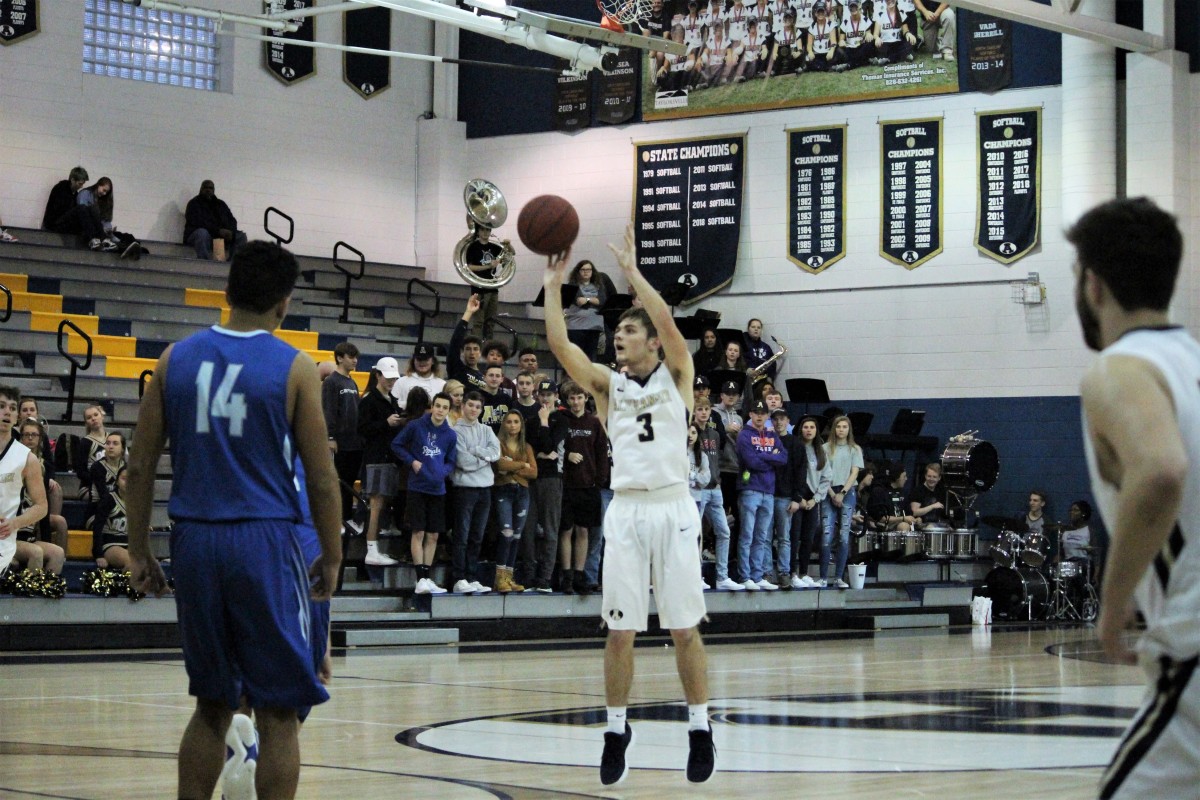 RED-HOT – Alexander Central guard Zach Wooten fires a long three-pointer during the first-half of Tuesday’s home victory over McDowell. Wooten finished four-for-four from downtown in Alexander’s 70-65 win over the Titans in the opening round tournament game.

Games started with a pair of women’s semi-finals contests beginning at 4 pm at Hickory. Following the women’s action, men’s champion Freedom will host Watauga in the first of two men’s semi-final clashes.
Hickory handed the Cougars two of their eight losses this season, winning 58-35 at Hickory, and 61-43 in Taylorsville last week.