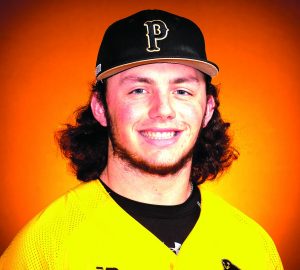 Misenheimer, N.C.. – The Pfeiffer University baseball team downed visiting Piedmont International 15-4 in game one of a doubleheader and took the nightcap 6-5 to secure the sweep.

In game one, after giving up two runs in the first, Pfeiffer rallied to tie the game in the home half of the inning when Kirby Lambert (Robbins, N.C.) tagged his first home run of the season.

Pfeiffer then exploded for seven runs in the second and added six more in the third to take the 15-4 lead.  In the second inning, the Falcons battered Bruin pitching to the tune of seven hits, which included a two-run triple by Mason Striplin (Kernersville, N.C.), The Falcons were also benefactors of three PIU errors in the frame.

In the third, Pfeiffer’s Ira Dorin (Lithia Springs, Ga.) delivered a two RBI double, which would be the only Falcon hit of the inning.  PIU made two more errors to aid the Falcon cause in the inning.

PIU did push across two runs prior to the big Falcon third inning, but that would be all the Bruins could muster, as Pfeiffer took the 15-4 win in five innings.

In game two, Pfeiffer again jumped on the Bruins early, bolting to a 5-0 lead after two complete innings.  The Falcons scored two in the first off a sacrifice fly from Bryce Marsh (Asheboro, N.C.) that plated Striplin.  Lambert would then score on a wild pitch to gain the 2-0 lead.

In the second with two out, Pfeiffer’s Bryan Kowalski (Oviedo, Fla.) kept the inning alive after reaching first following a dropped ball by the PIU catcher on the third strike.  Kowalski would steal second and after a Striplin walk, would come around to score when Lambert laced a double down the left field line.  Striplin would later score on a passed ball, as did Lambert, making it 5-0.

PIU erased the deficit to one run in the fourth by plating four runs and would tie the game at 5-5 in the fifth after getting runners on first and second with two out.  The Bruins’ Lee Thorne would provide the RBI single to right center to knot the game.

In the home half of the fifth inning, Pfeiffer’s Noah Martindale (Pembroke Pines, Fla.) lifted a deep shot down the right field line, his first round-tripper of the season, to provide the eventual winning run for the Falcons.

Pfeiffer then sat the Bruins down in order in the sixth and seventh innings to take the 6-5 win.

The wins improve Pfeiffer to 3-1 on the season while PIU drops to 0-6.

Pfeiffer will step into USA South play this upcoming weekend, hosting Piedmont College for a three-game set.  Game one is scheduled for Friday night, March 1 with a 6:00 p.m. first pitch.