The ACHS Varsity Baseball Team picked up a come-from-behind road win over the West Forsyth Titans on Thursday, February 28, in Clemmons.

ACHS, which evened its record at 1-1 on the young season, scored three runs in the seventh inning and claimed a 5-3 win over the Titans (1-1). 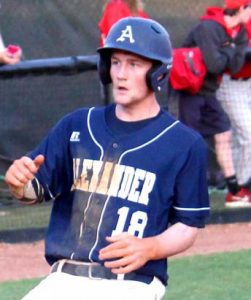 Byron Younts, who finished with two hits, blasted a two-run dinger to lead the Alexander charge in the seventh. He led the Cougars with two RBI in the game.

Jacob Bebber also blasted a home run, while Easton Rhoney, Bryson Hammer, and Kade Smith added one hit apiece for the Cougars in the win.

On the mound, Maddox Kerley posted the win despite walking three batters in the home half of the seventh inning.

Jem Lowrance, who joined the team at the conclusion of the basketball season, took over for Kerley in the seventh to chalk up the save.

Madison Thomas scored a goal and Sierra Jowers notched six saves in the net to lead the Alexander Central Lady Cougar Soccer Team to a 1-0 win over the Bandys Trojans on Thursday evening in Catawba.

Lillian Arillano recorded the assist on the Thomas’ goal.

The win was the first in the career for first-year Head Coach Ashley Bumgarner.