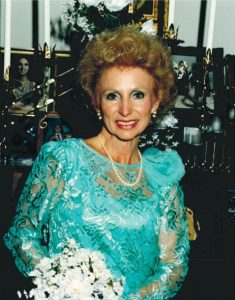 Ruth Ann Buff McAuley, 83, of the Bethlehem Community, passed away on Friday, March 1, 2019 at Abernethy Laurels in Newton.

She was born on January 29, 1936, in Cleveland County, the daughter of the late Johnnie and Lucy Mae Richards Buff. During her career, she worked as a receptionist at Chaircraft and later had the privilege of staying home and taking care of her family.

Along with her parents, she was preceded in death by her sister, Sue Buff Franklin, and an infant sister; daughter, Sherre Lynn Anderson Tolbert; and son-in-law, Eric Lynn Tolbert.

Those left to cherish her memory include her husband, William Dickey “Dick” McAuley of the home; daughters, Debbie Anderson Kerley and husband Jeff of Statesville, and Linda Anderson Carlton of Conover; grandsons, Jay Kerley of Boone, and Phillip Kerley and wife Kellie of Statesville; granddaughters, Krista Kerley of Statesville, and Angela Carlton of Hickory; great-grandchildren, Kendall, Paxton and Jase Kerley; nieces, Brenda Richards and husband Allan of Boiling Springs Lake, Phyllis Wilson and husband Tim of Morganton, and Rosemary Huffman and husband Steve of Raleigh; and nephew, Eddie Franklin of Morganton.

The family will receive friends on Saturday, March 9, 2019 from 10:00 a.m. – 11:00 a.m. at Alexander Funeral Service. A memorial service to celebrate the life of Ruth will follow in the funeral home chapel at 11:00 a.m. Inurnment will be with the family.