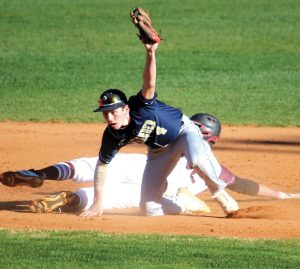 Varsity Cougar shortstop Dalton Stikeleather displays the ball after a pickoff play to erase a South Caldwell runner at second base.

By D.N. PENNELL, Jr.
The Alexander Central Varsity Softball and Baseball Teams opened the 2019 NW 3A/4A Conference schedule with a pair of tough losses at South Caldwell High School on Tuesday, March 5.
The ACHS Softball Team suffered an 11-4 loss to defending NWC Champion South Caldwell in the first league contest for both squads. The Spartans, which finished as the 2018 4A runner-up, plated five first inning runs and rolled to the seven-run win over the defending 3A state champs from Taylorsville.
Kyliee Lapham paced Alexander Central’s 11-hit offensive effort with two hits and a team-best three RBI.
In the pitching circle, freshman Faith Carrigan was saddled with the pitching loss after working one-plus innings. Kara Hinkle finished the game in relief of Carrigan.
The loss dropped the Cougars to 1-1 overall this season.
ACHS is slated to play  Watauga in a varsity only game at 4:30 pm on Thursday, March 7, at Central Park.
BASEBALL FALLS BEHIND EARLY IN 6-2 LOSS
The South Caldwell Spartans scored five runs over the first two innings and claimed a 6-2 win over the ACHS Varsity Cougars on Tuesday afternoon in Sawmills.
South Caldwell got a two-run homer from Hunter Ingle in the home half of the first to take a 2-0 lead. In the second, the Spartans added three more runs off Cougar starter Bryson Hammer to lead 5-0.
Hammer, who pitched three frames, suffered the mound loss for ACHS, allowing four earned runs and striking out five.
For South Caldwell, Clay Canale earned the mound win in relief of starter Trent Black. Black suffered an injury in the second inning and was forced to leave the contest.
Andrew Auton tripled and drove in a run to lead Alexander Central (1-3,0-1).
The Cougars are slated to host Watauga in a league contest on Thursday, March 7 at 4 pm. The team then travels to Matthews to face a powerful Providence Panthers team on Saturday afternoon, March 9.
Posted in Breaking News, Sports