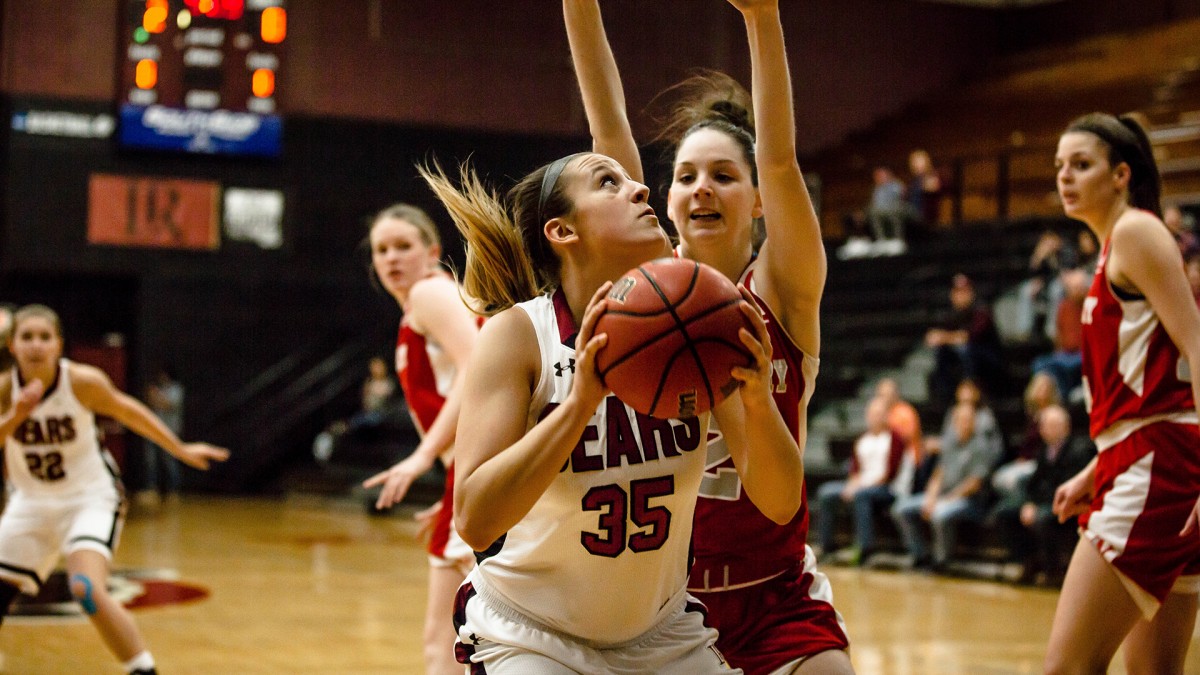 Bethlehem native Madi Suddreth has been named to the All-SAC Second Team in Women’s Basketball.

ROCK HILL, S.C. – The South Atlantic Conference announced their regular season awards and all-conference teams on Thursday morning, and a trio of Lenoir-Rhyne Women’s Basketball players were honored by the league officials. Madi Suddreth was named to the All-Conference Second Team, Kendall Toineeta to the Honorable Mention Team and Madeline Hardy was selected as an All-Freshman Team member.

Suddreth, the former 2017-18 SAC Honorable Mention selection, finished eleventh in the conference in scoring at 13.7 points per game and fifteenth in rebounding, averaging 6.5 per game.  The Taylorsville, N.C. native earned the conference’s player of the week honors after the Bears’ upset over then No. 20 Carson-Newman, 78-75, putting in a season-high 30 points, grabbing seven rebounds, and adding two steals and two blocks. The senior has been consistent all season long scoring the ball, as she sits at fourth in the SAC in field goal percentage (50.2). Suddreth will forever be in the Bears’ record book as she finished ninth in school history in scoring with 1,341 points in her career with Lenoir-Rhyne.

Toineeta started in 25 of her 28 games played this season and was viewed around the SAC as the conferences’ best ball-distributor. The Cherokee, N.C. native averaged 5.6 assists per game, which ranks tops in the conference. The senior also is known for her quick hands and defensive prowess, as she is second in the conference in steals per game, 2.5 per game. Toineeta also led the team in double-digit scoring efforts with 17, while her season-high came against Coker where she put in 27 points. The primary distributor for the Bears will go down in the LR record books as she has 389 career assists, good for fifth in school history.

Hardy has made an impact on the roster from the moment she stepped on the court, but she had her coming out party at Anderson on December 15, 2018 – a game she put up 21 points and 14 rebounds to bust onto the SAC scene. The Madison, N.C. native managed to post five double-doubles on the season, two of those coming against Carson-Newman. The forward leads the Bears in rebounding and ranks eighth in the conference at 6.9 per game. This is the second-straight season that Lenoir-Rhyne had one of their own named to the all-freshman team (Kennedy Weigt, 2017-18).

The trio of Bears led the team to a regular season record of 16-12, 11-9 in the conference. Lenoir-Rhyne reeled off four wins in a row at the end of the regular season to earn the No. 4 seed, resulting in a quarterfinal round hosting of Newberry. The Bears defeated the Wolves on Wednesday night and advanced to the SAC semifinals for the first time since 2015.

The last time the women’s basketball team had three all-conference selections was in the 2013-14 season, where Jazmine Charles and Jenni Gust earned first team honors and Danielle Bongiorno was tabbed as an Honorable Mention selection.