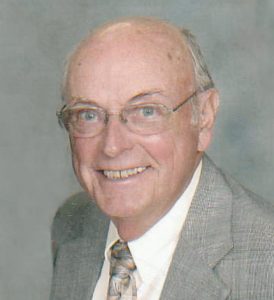 Ned was born October 10, 1937, on a cotton mill hill in Alexander County, and was the youngest son of Shields Columbus Little and Emma Chapman Little.

In addition to his parents, he was preceded in death by three brothers, Henkle, Owen, and Bryce; and two sisters, Bonna Lee and Mozelle.

Ned is survived by his devoted wife and high school sweetheart, Mae Reese Little. Ned and Mae were married in 1954 and established a Christian home, enjoying 64 happy and blessed years together. Two daughters are left to honor and cherish their father’s memory, Vickie Little Hayes of Raleigh, and Julie Little Cody and husband Mike of Raleigh. Ned was very proud of his four grandchildren, Lindon Hayes and spouse Teresa of Jacksonville Beach, Florida, Jarrod Hayes and spouse Sareh of Atlantic Beach, Florida, Sarah Cody Lightfoot and spouse Justin of Taylorsville, and Alex Cody of Raleigh. Two great-granddaughters, Reagan and Ara Hayes, were the delight of their Pa Pa. He looked forward to talking with them often on Facetime, and giving them rides on the tractor and gator when they visited.

The children, grandchildren, and great-grandchildren desired to spend time frequently with Pa and all benefited greatly from his wisdom, wit, and stories. His tender ways, gentle voice, and genuine compassion captivated those who loved him most. He provided a loving example of how to live a life of service, sacrifice, and faith. He left a treasured legacy as a humble man who followed The Lord. What joy he brought to his family; the memories and laughter will always be remembered. He will be missed more than words can express.

Serving Christ was at the center of Ned’s life. He was a faithful member of Calvary Baptist Church in Taylorsville, where he served as adult Sunday School teacher, choir member, and song leader for over 55 years. In the early days of Calvary Baptist, “Ole Brother Ned” was a trusted helper to his brother, Rev. Henkle Little. After Henkle’s death, Ned continued to be a vital part of the ministry at Calvary, assisting his dear friend and pastor, Rev. Stephen Dagenhart. Ned was one of the volunteers who helped clear the land and begin the Taylorsville Baptist Camp Meeting in 1963, and the ministry has continued for 55 years. Ned loved to sing gospel songs, particularly the old hymns or songs written by A.E. Brumley or G.T. Speer. He advised, “If you find a good one, sing it often. You won’t wear it out.” He enjoyed singing with quartets at Calvary, and was able to do so as recently as February 3rd.

Ned was employed at Lewittes Furniture as an upholsterer for 25 years and then at Carpenter Company in the roles of plant manager and supervisor for 24 years, 9 months. He was a hard worker; always fair and honest. He quietly lived an influential life by faithfully serving The Lord Jesus Christ and caring for others. He often emphasized, “I’ve enjoyed the goodness, mercies, and blessings of The Lord every day of my life. Every day.”

Ned will be remembered for his warm smile and the twinkle in his blue eyes. He greeted the congregation at Calvary after each service with a friendly smile, hand shake, and sincere word of encouragement. Ned was well-known for visiting the sick or making phone calls to check on folks in times of trouble. And when he told you he was praying for you, he meant it. He will also be remembered for his words of wisdom and unique way of making a point. He was a true friend and inspiration to many, “Uncle Ned” to special nieces and nephews, “Daddy” to two very blessed daughters, a second father to his son-in-law, Mike, and “Pa” to his loving grandchildren, whom he considered his most precious blessings.

Memorials may be made to the Calvary Baptist Church building fund or the Taylorsville Baptist Camp Meeting.

Adams Funeral Home and Cremation Services is honored to be serving the Little Family.