The Alexander Central Varsity Baseball Team improved to 3-1 in NWC action with a resounding 14-0 victory at McDowell on Wednesday, March 13.

Dawson Elder tossed a complete-game, two-hitter and fanned 10 in the five-inning win in Marion.

Offensively, ACHS busted the game open with a seven-run uprising in the third frame. 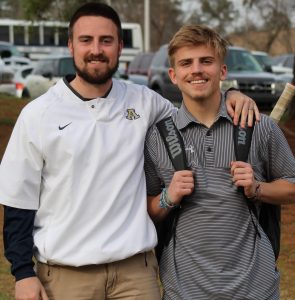 ACHS Senior Carter Patterson is pictured with Cougar Tennis Coach after picking up his 50th career singles win on Wednesday.

The Cougars are slated to play at Western Harnett on Saturday, March 16.

Patterson’s win in Sawmills upped his season record to 6-0 and improved his career mark to 50-14.

In the match, South Caldwell handed the Cougars a 7-2 loss to drop ACHS to 2-4. Patterson and Cameron White combined for a win in doubles for the team’s second victory on the day.

The ACHS Varsity Softball Team dropped to 2-2 in league games with a 7-6 loss to McDowell on Wednesday in Marion.

The Lady Titans scored the game-winning run in the home half of the eighth frame to win the league contest.

Faith Carrigan suffered the mound loss to slip to 3-2 on the year.

The Lady Cougars will host the Varsity Clash this coming Saturday, March 16, at Central Park.