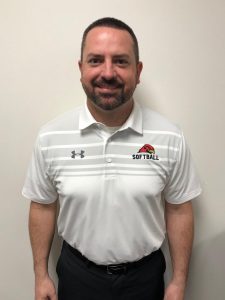 HICKORY, N.C. — Catawba Valley Community College has announced that Josh Bumgarner, a 13-year head coaching veteran, was officially named the first-ever head coach of the Catawba Valley Community College softball program on Friday.
CVCC will begin its softball program this fall and will be immediately eligible for championship contention in the spring of 2020.
“I’m extremely humbled and blessed to have this opportunity,” Bumgarner said. “I’m a firm believer that the good Lord put me here. All the thanks and honor go to Him. I’m blown away to have this opportunity. Even just to get to build it from the ground up is something that blows my mind.”
CVCC Athletic Director Nick Schroeder is thrilled to have Bumgarner establish the Red Hawks softball program.
“We are excited for coach Bumgarner to start our program,” Schroeder said. “His excitement for the game of softball and the advancement of student athletes is infectious. Josh will bring hard work ethic to our program, and we are excited to see where he can take it.”
An Alexander County native and Alexander Central High graduate, Bumgarner was taught the value of hard work by his father and grandfather, who both worked in the saw mill industry.
Bumgarner believes that trait will help him succeed at CVCC.
“Playing basketball and football in high school, I wasn’t the most athletic and not the most gifted as far as height goes so I had to outwork everybody to be successful,” he said. “I’ve tried to carry that over into my coaching style and instill that into my players. So far it seems to be a pretty good combination. We’re just ready to go to work and outwork everybody else.”
Bumgarner’s extensive coaching pedigree includes a pair of 3A state championship titles to his resumé in 2013 and 2018 as an assistant softball coach at Alexander Central High School.
The Appalachian State alumnus also has six-year coaching stint at South Iredell High School.
Also not new to starting up softball programs, Bumgarner was the inaugural head coach of the Alexander Central Post 170 softball team this past summer.
“I believe that I know what it takes to win and be successful,” Bumgarner said. “I am a firm believer that having a strong family-oriented environment for the team is the kind of foundation of that. That’s what I base everything on. I’m a player’s coach and are looking forward to finally getting some of those players around here and getting to work.”
Bumgarner believes there is a lot of immediate value to potential athletes joining the Red Hawks’ softball program from both an athletic and academic standpoint.
“CVCC is a good outlet for people in this area to be able to take advantage of and still play a game that they love for a couple of years,” he said. “We’ll try to help them move on to the next phase of their career if that’s something that they want to pursue. I think this is a great opportunity for the kids that play softball in this area.”
As for those who may not be familiar with Bumgarner’s name, he wants everyone to know one important thing about him.
“You won’t find a coach that loves his players more than me,” he said. “You won’t find a coach that is as passionate about what they are doing and his team as I am. I look forward to showing that in the years to come here at CVCC.”
Posted in Breaking News, Sports