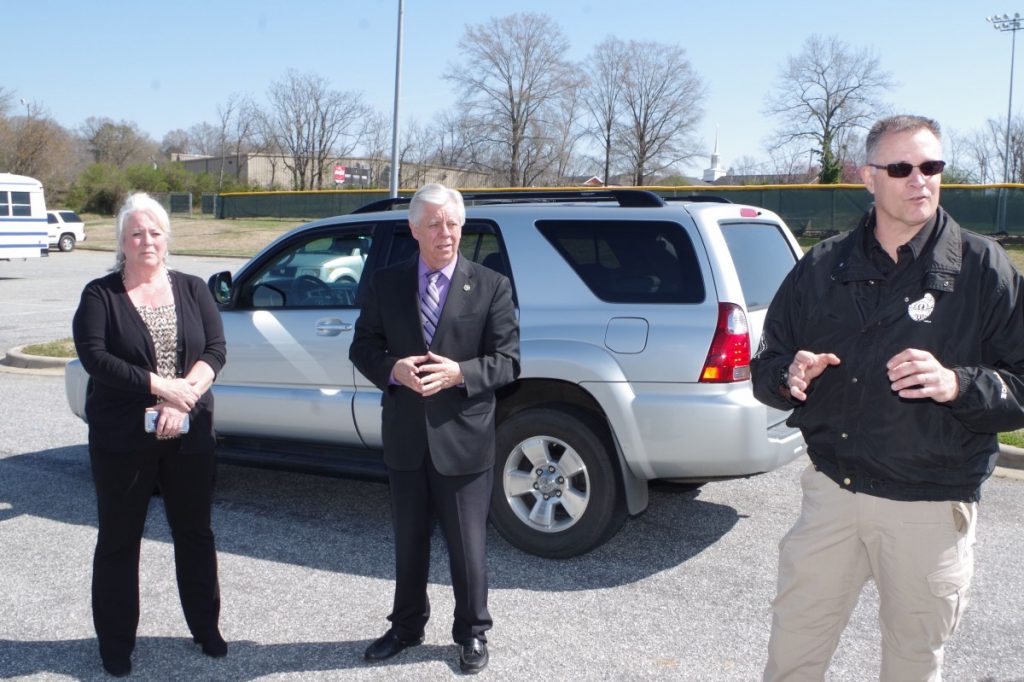 A false alarm from an alert system prompted several local schools to be placed on lockdown, and caused concerns for many parents and family members of students on Thursday, March 28.

“This morning the alert was sounded for a Code-Down (stay in classrooms).  At that time, our school immediately carried out our safety procedures and the entire campus and students were secured.  Several law enforcement officers came to campus as well as our two resource officers that were already at school.  After a careful investigation, it appears there was a malfunction with our bell system which sounded the bell for a Code-Down.  The malfunction resulted from work that was being done to the system this morning.

“Regardless, at the time of the event, we were unclear of why this occurred and treated it as a true Code-Down.  I would like to thank the Taylorsville Police Department and Alexander County Sheriff’s Office for their extraordinary response time and professionalism in searching the school.  I would also like to thank our staff who immediately sprang into action to keep our students safe.

“As a result of the Code-Down, we did find a student in possession of a pocket knife and a bullet.  We thank the school staff, Russell Greene, and law enforcement in their thoroughness in searching the school and we will continue to investigate this particular situation. Any additional information regarding this will be shared when or if available.

“We will continue to adapt to meet the safety demands of our current climate. We will address any threat to school safety and practice these protocols to be prepared in the event they are needed.  If you have any questions or concerns, please feel free to contact me at anytime,” said Palmer.

“The best we can figure, there was a system malfunction,” said Taylorsville Police Chief Dennis James during a press conference Thursday. “Our officers, NC State Highway Patrol, Sheriff’s Officers, and NC Probation and Parole responded to search the school about 8:50 a.m. Everyone did an excellent job.”

A Code Down was also applied to the Student Success Center on the ACHS campus, and Code In (continue to teach, stay in building) was issued at Taylorsville Elementary, automatically, due to its proximity to ACHS, said Dr. Betsy Curry, Associate Superintendent for Alexander County Schools.

A room-to-room sweep was done at Alexander Central, which takes some time due to the school’s size.

“During the safety precaution search, a pocket knife was found at the high school. That had nothing to do with the alarm, which we believe was a malfunction,” Sheriff Bowman added.

“He said his brother had given [the knife] to him,” Dr. Curry related.

As a precaution, East Alexander Middle School was placed on lockdown as well, because the ACHS student who was in possession of the knife and bullet had a sibling at EAMS, said Sheriff Chris Bowman.

“This led us down to East Middle School, where we conducted an interview with a student there about the knife. A safety search was done there, [at East] also. A matter of minutes after that search was done, school was back to normal.”

The Times has learned that, due to the alert, approximately 50 to 60 parents came to ACHS to attempt to pick up their students. They were later allowed in after the search had been completed.

“We want to thank there parents and students during this situation for their cooperation and understanding. And we thank Emergency Services, Probation/Parole, Taylorsville Police Department, Sheriff’s officers, school personnel, and EMS, who’ve all been training for similar situations since Columbine,” Bowman added.

“No one seemed angry,” Chief James stated. “I even had a parent come up and hug me.”

As a result of the alarm scare, the safety drill planned for the afternoon of March 28 was cancelled, stated Renee Meade, public information officer for the school system.