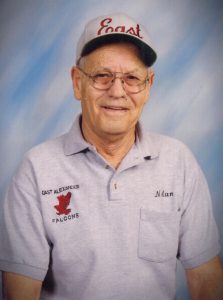 He was born on September 5, 1933, in Wilkes County, to the late Luther McKinley and Agnes Brewer Morrison.

In addition to his parents, he was preceded by an infant brother, Roy; a brother, Bobby Morrison Sr.; and a son-in-law, Freddie Bunch Sr.

Nolan served in the US Army, 1953-1955. He retired from the Alexander County School system as custodian at East Junior High, where he enjoyed his time with the students. He worked closely with Alexander County Parks and Recreation teams and interacted with many youngsters involved.

He was a master gardener, and avid bird watcher, always seeing that his feathered friends had plenty to eat. He watched NASCAR, every possible time, and loved working puzzles. He enjoyed fishing with the grandchildren as they grew up. He and man’s best friend, YoYo, were widely known as constant companions.

Visitation will be held on Wednesday, April 3, 2019, from 2-3:15p.m., at Alexander Funeral Service with funeral services at 3:30 p.m. in the funeral home chapel. Rev. Bill Orren and Rev. Brian Kerley will officiate. Burial will follow in the Taylorsville City Cemetery. The North Carolina National Guard will provide military honors.

In lieu of flowers, memorials may be made to Alexander County Hospice, 52 Lucy Echerd Ln., Taylorville, NC 28681.