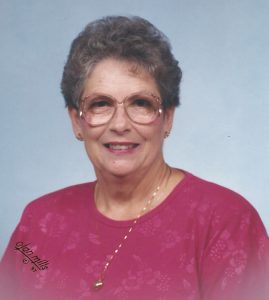 Mrs. Warren was born November 9, 1934, in Iredell County, the daughter of the late Frank Davidson and Noma Payne Davidson.

She had worked in the cafeteria at Hiddenite Elementary School for over 20 years. She was a faithful member of Mt. Wesley Church, where she was a Nursery Sunday School teacher for many years. She was a former member of the Gideon Auxiliary, enjoyed cooking large meals and inviting her family and friends to come and eat. She also loved to work in the garden, and she dearly loved her four grandchildren.

Including her parents, she was preceded in death by her husband, Roy Lee Warren; two sons, Roy Lee Warren, Jr. and Roger Dale Warren; a sister, Evelyn Goodin; and a brother, Bill Davidson.

The funeral service will be held at 4 p.m., Sunday, April 14, 2019 at Mt. Wesley Church. Rev. Eric Yelton and Rev. Scott Atkins will officiate. Burial will follow in the church cemetery. The family will receive friends one hour prior to the service.

Memorials may be made to: Mt. Wesley Church Building Fund.