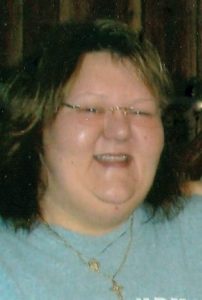 Born, May 19, 1974 to Junior Robert and Anna Mae Fox Wallace in Alexander County, she was of the Baptist faith. She was employed by MOCARO Dying and Finishing in Statesville, before her health forced her to retire.

She was preceded in death by her grandparents, Jimmie and Blanche Fox and Herman and Mozelle Wallace.

She loved music and going to the beach and mountains. Spending time with her family, if it was just a ride together, brought her great enjoyment. Her special companions were Little Hun and Darla, “girl’s best friends.”

In addition to her parents, she is survived by two sisters, Amanda Wallace and Kaitlyn Mayberry, both of Taylorsville. She has a foster son, Brandon Watts of Taylorsville, along with a number of aunts and uncles, with a host of cousins.

Visitation will be held on Monday evening, April 15, 2019 from 6:30-8:00 p.m. for family and friends at Alexander Funeral and Cremation Service. Inurnment will be with the family.

Alexander Funeral and Cremation Service has been entrusted with arrangements.